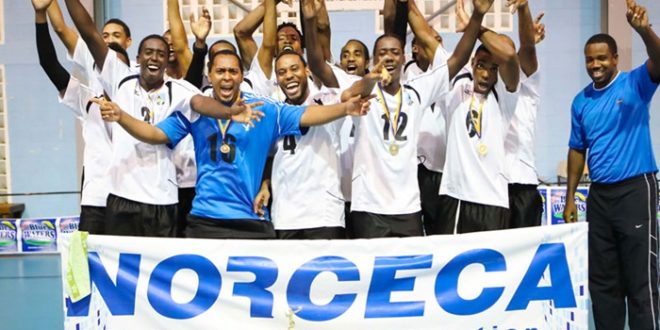 GROS ISLET, St Lucia, August 13, 2017 – St Lucia finished off business against St Maarten 3-0 ( 25-18, 25-19, 25-16) to win gold in the men’s Group D of the NORCECA Zone of the FIVB World Championships Qualifiers second round for teams in the Eastern Caribbean Volleyball Association (ECVA), at the Beausejour Indoor Facility.

It was a workmanlike display of all round Volleyball skills, St Lucia made it a perfect, winning all four matches.

St Lucia had earlier handed St Martin and St Maarten, 3-0 defeats and beat Anguilla, 3-1, in the preliminary phase of the tournament.

Led by their one man scoring army, Outside Hitter- Joseph Clercent, who recorded 13 points, St Lucia took little time in securing the first place, which turned out to be more than easy.

On the opposite end of the court, the best scorer for St Maarten was Opposite Hitter- Riegmar Valies, who only claimed 6 points.

Head Coach of St Lucia- Terry Verdant, who had predicted a three- nil defeat on St Maarten, revealed that they came out very aggressive against their opponents, which rattled them in the opening set.

“What we also did was to play without a Libero, so that we could have had five hitters and that was a big change for us”, Verdant confirmed.

Looking ahead to the more demanding Continental Championships, Verdant projected an intensification in the team’s preparations for the outing in the USA, next month.

“ We plan to work on our rhythm, our tempo , our elevation as we are going to be coming up against those big teams who have some very tall players over six feet … We also have to work on our defence as we were not as we should in this tournament”, Verdant related.

Conceding that his team was beaten by a superior St Lucia team, Head Coach of St Martin, Dimitri Beauperthuy, acknowledged, “St Lucia showed their experience in playing in these types of games”.

“ Our passing was not there; We had our setters running up and down, we made a lot of mental just came up short”, Beauperthuy assessed of the final.

But Beauperthuy relished the opportunity to play in the tournament, especially against St Lucia, stating: “It was a great experience”.

St Lucia joins St Vincent and the Grenadines as the ECVA representatives at the Continental Championships in Colorado Springs, USA next month.