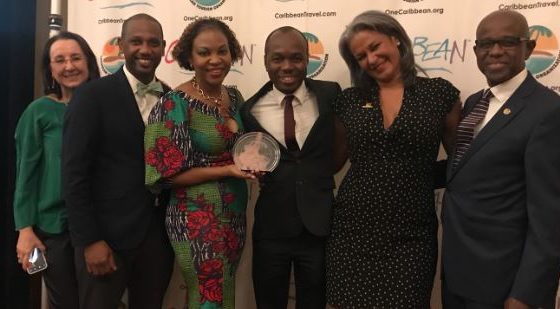 The island received the award for Best Social Media campaign in the “Up the Social Ladder” category for its “Let Her Inspire You” promotion. It aimed to increase awareness of Saint Lucia in Canada, the United States and the UK through a social media campaign to boost online traﬃc, social media followers and bookings in 2018.

Receiving the award on behalf of Saint Lucia were Minister for Tourism, Hon. Dominic Fedee; STLA Executive Chairperson, Agnes Francis; and Chief Communications Officer, Clinton Reynolds. In accepting the Award, Hon. Fedee congratulated the other nominees and thanked the CTO for honouring Saint Lucia with the prestigious award.

“We are very happy to be receiving this award tonight,” said Minister Fedee. “This honour is the product of the hard work the team has put in to rebrand Saint Lucia and increase its presence, especially on social media. I want to congratulate Mrs.

Francis and her team at the Tourism Authority on their vision and efforts in marketing Saint Lucia’s unique and captivating product,” he added.

As a direct response to Saint Lucia being spared from the worst Atlantic hurricane season in Caribbean history, the Saint Lucia Tourism Authority launched the “Let Her Inspire You” campaign in November 2017, to let prospective visitors know it is safe to visit the island. The aggressive social media marketing blitz aimed to raise the island’s profile on social media by developing a distinct online presence, while highlighting Saint Lucia as being untouched by the hurricanes. It also sought to arouse curiosity from prospective visitors and retain the interest of repeat travelers by showcasing the destination’s rich culture.

“We wanted to capture the imagination of every potential visitor and give them a panoramic view of what Saint Lucia has to offer, using the fastest-growing marketing tool in the industry – social media,” Mrs. Francis stated. “The award is testament that our strategy is working, so we will continue to develop similar approaches to promote the island and increase visitor arrivals.”

The SLTA promotion included 200 unique images and 10 campaign videos, a sweepstakes and visits by high profile social media influencers to push brand Saint Lucia and increase the social media following on Facebook and Instagram. The effort also incorporated rebranding of the SLTA’s social media accounts from @SaintLuciaNow to @TravelSaintLucia to urge consumers to ‘Travel to Saint Lucia.’ The new hashtags #LetHerInspireYou and #TravelSaintLucia were adopted to connect and engage with social media users and to allow content to be discoverable easier.

The five-month “Let Her Inspire You” social media campaign generated 11 million impressions, 20,000 sweepstakes entries and a whole lot of buzz for the island. It also spiked the destination’s Facebook following by 33% and Instagram by 21%.

The awards gala was held at the Wyndam New Yorker Hotel under the theme, “Recognizing the Media: Honouring Top Caribbean Stories,” with the biggest

players in Caribbean tourism attending. The CTO Travel Media Awards celebrate the very best in US and Caribbean travel journalism and reward individuals, organisations and destinations who produce and present exceptional work.

Saint Lucia’s nomination for the Best Social Media campaign in the “Up the Social Ladder” category was one of two new social media categories awarded by the CTO this year.