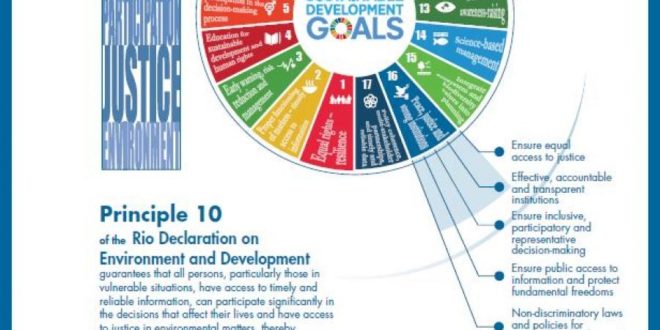 Saint Lucia has become a signatory to the Principle 10 negotiations aimed at establishing an agreement that would provide citizens in Latin America and the Caribbean (LAC) an opportunity to be involved from the onset in the decision-making process on environmental matters.

In this Declaration, signatory countries committed, with the support of the Economic Commission for Latin America and the Caribbean (ECLAC) as technical secretariat, to advance the implementation of a regional agreement for the full implementation of the rights of access to information, public participation and access to justice in environmental matters.

The island is being represented at the seventh meeting of the negotiating committee of the regional agreement on access to information, participation and justice in environmental matters in LAC taking place in Argentina.

Permanent Secretary in the Department of Sustainable Development, Valerie Leon, who is attending the meeting that ends on Friday, said that St. Lucia has joined the process thereby making it the 24th signatory country to this ambitious initiative.

“This marks the beginning of another important step in this process, as we now commit to working towards building the capacity of our national institutions and enhancing our legislative framework at the national level, to effectively implement this regional instrument and to facilitate progress on access rights.

“Furthermore, the government of St. Lucia applauds the sterling efforts of the Saint Lucia National Trust. The Trust remains very instrumental in this process and the Government looks forward to continued collaboration with them, as well as other government agencies and the Saint Lucian public in general, as we remain cognizant that this is only the beginning,” she added.

Addressing the opening ceremony of the conference Danielle Andrade-Goffe of Jamaica made an impassioned intervention which called for better implementation of access rights.

“In the last five years since we began this journey, social conflicts in the LAC region have been escalating. Global Witness in their new report ‘Defenders of the Earth – Global Killings of Land and Environmental Defenders’ noted that 200 environmental defenders were killed in 2016 as a consequence of defending their land, rivers and forests from industries.”

She said 60 per cent of those murdered were from Latin America “and while we in the Caribbean may not have as many grievous incidences, we are not unaffected. We are all one people because we are equally dependent on this planet we call home.

“Approximately 16 people died last year while protecting the Amazon forest from logging; the Amazon which we commonly refer to as the lungs of the earth because of the amount of oxygen generated by its lush forests. They should not stand alone when they are protecting the very air that we breathe,” Andrade-Goffe said.