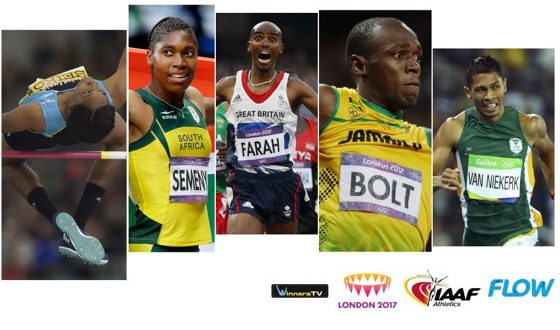 PRESS RELEASE:-Castries, Saint Lucia, August 2, 2017 – Saint Lucian track and field fans will be able to enjoy the final competitive appearance of The Fastest Man Alive as the IAAF World Championships in Athletics get underway on Friday in London, England. Eight-time Olympic champion Usain Bolt is set to retire after defending his 100m title during the 10-day event.

Also set to compete in the women’s High Jump is Saint Lucia’s Pan Am Games champion, Olympic finalist, and Flow brand ambassador, Levern Spencer. The 33-year-old Babonneau native will represent the island at the World Championships for the seventh time.

From the first gun all the way to the final thrilling finish, every rivalry, and every record, Saint Lucian fans will be able to catch all the action live on Winners TV, channel 126. Winners TV has secured exclusive broadcast rights for the Championships in Saint Lucia, with Flow coming aboard as an Official Broadcast Partner.

Flow’s support for the local broadcast of the World Championships is in line with the company’s dedication to bringing world-class programming to its Flow TV customers. Flow has also been a steadfast ally for sports development on the local and regional scene, including sponsorship of the annual CARIFTA Junior Track and Field Championships.

The Winners TV broadcast will also feature top local athletes, coaches, and athletics officials, as well as quizzes, competitions, and prize giveaways. The World Championships will run from August 4th to 13th2017 from London, England.