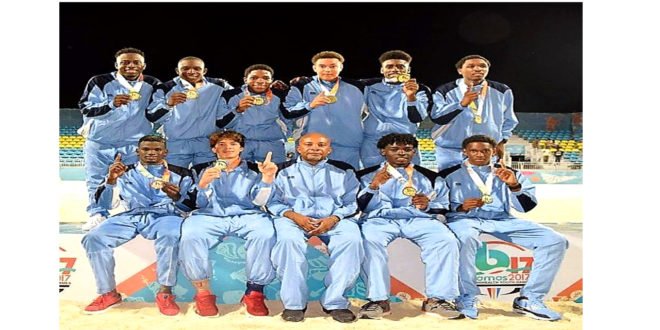 The Government of Saint Lucia has once again extended congratulations to Team Saint Lucia, following a second Gold Medal win at the Commonwealth Youth Games in The Bahamas.

Speaking at Monday’s pre-Cabinet briefing, Acting Prime Minister and Minister for Equity, Social Justice and Empowerment, Honourable Lenard Montoute, said that the entire team deserved a heroes’ welcome for this being the country’s best showing at the Commonwealth Youth Games.

“I take this opportunity to congratulate our football team who won the Gold medal in beach football, having defeated Trinidad and Tobago,” stated the Acting Prime Minister.

“This is a wonderful accomplishment as a result of an outstanding performance on their part. Saint Lucia, so far having two Gold medals at the Games, is the best performance at the Games and as a Government we compliment our young athletes and I say on behalf of the Government and the People of Saint Lucia our heartfelt congratulations to Ms. Julien Alfred who won the 100 meter and our football team who won the beach football. We look forward to welcoming them home and to giving them the hero’s welcome that they deserve.”

The Acting Prime Minister called on all Saint Lucians to rally around the 23-strong Saint Lucia Team along with officials who are expected home later this week.