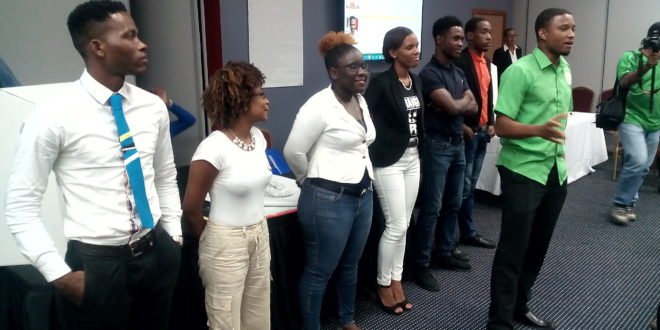 PRESS RELEASE
On Saturday May 27 2017, a new Executive was elected to the Saint Lucia National Youth Council during its General Assembly at the New Financial Administrative Centre, Pointe Seraphine, Castries.

The General Assembly commenced with morning registration of youth clubs and groups from across Saint Lucia. During the Assembly’s proceedings, the 2014- 2017 executive report of the National Youth Council was presented by Ms. Louise Victor, outgoing President.

In the latter part of the day, the participants of the assembly engaged in a decisive session to develop a mandate for the incoming Executive of the Saint Lucia National Youth Council for the next two years. The areas of focus were: Constitutional Reform, Youth Development Programming, Public Relations Campaign, Audit Completion and an Educational Drive on NYC as an institution.

The following young persons were voted in to form the 15th Executive of the Saint Lucia National Youth Council:

The Presidential position was won by Mr. Jeshurun Andrew, with 103 to 65 votes versus his contender Mr. Kirby Sydney.

In the post of 1st Vice President, Mr. Nyus Alfred came out victorious with 102 to 64 votes against NYC Executive stalwart, Miss. Kim Cayol.

The post of the General Secretary was won by Ms. Raejean Montoute, with 99 to 70 votes against her incumbent, Ms. Dianthea Justin.
The position of Assistant General Secretary was voted to be re-opened for nominations. After the ballots were counted, 96 voters (58% of the overall votes) ruled over the minority who were in favour of contender, Ms. Kenier Barthelmy, who received 67 votes (42% of the overall votes).

The motion was then moved to re-open nominations to elect an Assistant General Secretary, during which time Ms. Racquel John was nominated into the post, and voted in with 82 votes.
The post of Treasurer was uncontested; Ms. Anya Edwin received 103 to 55 votes to Re-open Nominations.

The position of Public Relations Officer was closely contested. Mr. Chaddie Faucher received 86 to 82 against his contender, Ms. Herma Demacque.

The new executive was congratulated by Ms. Victor, Youth and Sports Officers of the Department of Youth Development and Sports, the Electoral Committee chaired by past NYC President, Mr. Timothy Ferdinand and Returning Officer for Elections, NYC stalwart Jonathan Chalon.

Special thank you goes out to the Electoral Committee for doing such an outstanding job with organizing the 15th NYC elections and general assembly. The Executive would like to thank the delegates and the extended youth population who invested their trust, some through means of secret ballot, in the newly elected Executive.

The Saint Lucia National Youth Council is an institution governed by the principle of harnessing the talent, energy and creativity of St. Lucian youth, and transforms these into a potent resource for individual, community and national transformation.