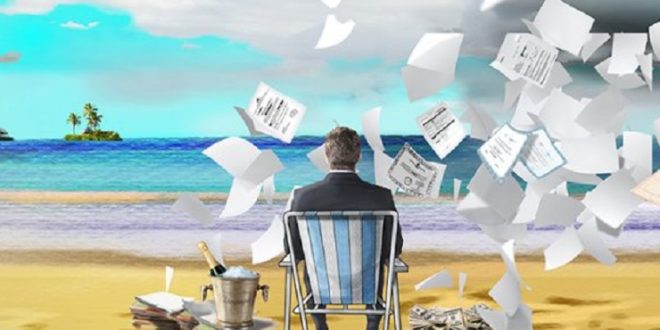 The secret dealings of people from Queen Elizabeth II to prime ministers and politicians have been disclosed in the Paradise Papers. (Credit: International Consortium of Investigative Journalists) Read more: http://www.caribbean360.com/news/trouble-paradise-leaked-files-expose-worlds-elite-using-caribbean-islands-tax-havens

BRIDGETOWN, Barbados, Monday November 6, 2017 – As Caribbean countries continue their fight to throw off the tax haven label, some explosive information about the tax and financial affairs of people and companies who appeared to have invested or sheltered huge amounts of cash in offshore tax havens, including in the Caribbean, has been released.

The secret dealings of people from Queen Elizabeth II to prime ministers and politicians have been disclosed in the Paradise Papers – more than 13 million leaked secret corporate files related to offshore law firm Appleby. The papers also contain more than half a million files from the Singapore-headquartered Asiaciti Trust, a family-run offshore specialist that has satellite offices from Samoa in the South Pacific to St Kitts’ sister isle Nevis; as well as documents from corporate registries in 19 tax havens, 12 of them in the Caribbean – Antigua and Barbuda, Aruba, the Bahamas, Barbados, Bermuda, the Cayman Islands, Dominica, Grenada, St Kitts and Nevis, St Lucia, St Vincent and the Grenadines, and Trinidad and Tobago.

Much like the Panama Papers which involved millions of files leaked last year from Panamanian law firm Mossack Fonseca and showed how some of their clients laundered money, dodged sanctions and avoided tax, the Paradise Papers released over the weekend reveal secrets of the world elite’s hidden wealth.

The latest records expand on the revelations from the Panama Papers investigation by the International Consortium of Investigative Journalists (ICIJ) – a Washington-based group that won a Pulitzer Prize for reporting on the Panama Papers – and its media partners.

“The new files shine a light on a different cast of underexplored island havens, including some with cleaner reputations and higher price tags, such as the Cayman Islands and Bermuda,” the ICIJ said.

“Taken as a whole, the leaks reveal offshore traces of spy planes purchased by the United Arab Emirates, the Barbados explosives company of a Canadian engineer who tried to build a “super gun” for Iraqi dictator Saddam Hussein and the Bermuda company of the late Marcial Maciel Degollado, the influential Mexican priest who founded the Catholic religious order the Legionaries of Christ and whose legacy was marred by allegations of child sexual abuse.”

However, the ICIJ noted that the documents from corporate registries in 19 jurisdictions include more than 1,000 from Antigua and Barbuda which provides no online corporate information and more than 600,000 from the online registry of Barbados, which does not list shareholders or directors.

The files show that millions of pounds from the Queen’s private estate have been invested in a Cayman Islands fund as part of an offshore portfolio that has never before been disclosed. The records show that as of 2007, the queen’s private estate invested in the Cayman Islands fund that in turn invested in a private equity company that controlled UK rent-to-own firm BrightHouse, which was criticized for selling household goods to cash-strapped Britons on payment plans with interest rates as high as 99.9 percent.

A spokesman for the Queen told ICIJ partner The Guardian newspaper that the Duchy has an ongoing investment in the Cayman Island fund and was not aware of the investment in BrightHouse, and that the Queen voluntarily pays tax on income from investments.

The Paradise Papers also revealed the secret dealings of Stephen Bronfman, adviser and close friend of Canadian Prime Minister Justin Trudeau. According to the ICIJ, the files reveal that Bronfman teamed up with others to quietly move millions of dollars to a Cayman trust.

“The offshore maneuvers may have avoided taxes in Canada, the United States and Israel, according to experts who reviewed some of the 3,000-plus files detailing the trust’s activities,” the ICIJ said.

Other politicians with newly disclosed offshore ties include Brazil’s finance minister, Henrique de Campos Meirelles, who created a foundation in Bermuda “for charitable purposes”. He told ICIJ, however, that the foundation he created does not benefit him personally and will support education charities after his death.

Extensive offshore dealings by US President Donald Trump’s cabinet members, advisers and donors have also been exposed, with some of them having connections to offshore companies in Bermuda, the Cayman Islands and Barbados.

The information about the offshore interests of politicians and corporate giants was obtained by German newspaper Süddeutsche Zeitung and shared with the ICIJ and a network of more than 380 journalists in 67 countries.

Nearly 7 million records from Appleby and affiliates cover the period from 1950 to 2016 and include emails, billion-dollar loan agreements and bank statements involving at least 25,000 entities connected to people in 180 countries.

Appleby released an online statement saying it had investigated ICIJ’s questions and is “satisfied that there is no evidence of any wrongdoing.”