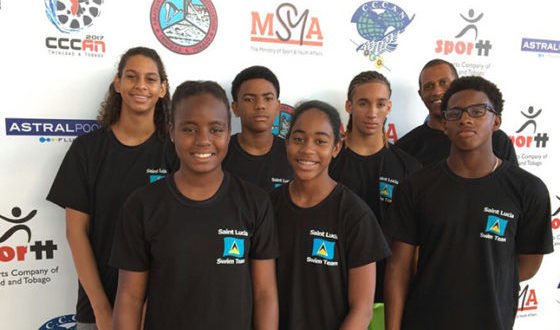 With countries like Puerto Rico, Trinidad, Bahamas, British Virgin Islands, Panama, Costa Rica, Aruba, Jamaica, Cuba, Bermuda competing, the team was faced will the challenge of keeping up with the best.

St. Lucia placed 16th tying with Suriname on the score chart out of 23 countries with 25.5 points.

National and age group records were also set by Jayhan Odlum Smith in the 200 Fly and Terrel Monplaisir in the 100 Back.

Naima Hazell, Jamarr Archibald and Mikaili Charlemagne joined the team in making finals at least once during the championship and keeping within the top 8 swimmers in the competition in various strokes.

The Team was also accompanied by President Eddie Hazell who represented SLASA at this year’s CCCAN Congress. President Hazell expressed his satisfaction with the team performance however highlighted the need for St.lucia to be exposed to the appropriate training regime in order to elevate its swimmers to compete successfully regionally and internationally.

Next year, the Central American and Caribbean Swim Championship will be held in Aruba