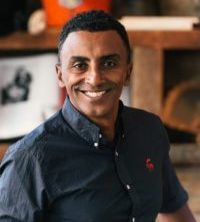 One such collaboration is the recreation of the Obama Administration’s first State dinner at the Celebrity Chef Dinner Saturday, January 13th taking place at Ti Bannane at Coco Palm Resort.

The 5-course menu will feature local ingredients, herbs and spices including callaloo, tomatoes, yams, banana, passion fruit, coconut, conch and other seafood. The evening will be a fusion of island chic and fine dining with a cocktail hour, live entertainment, rum tasting and chocolate pairing.

Chef Samuelsson is the acclaimed chef behind many restaurants worldwide including, Red Rooster, Streetbird Rotisserie, and Marcus B&P. Samuelsson was the youngest person to ever receive a three-star review from The New York Times, Samuelsson has won multiple James Beard Foundation Awards including Best Chef: New York City.

Samuelsson was also crowned champion of television shows “Top Chef Masters” and “Chopped All-Stars”, and served as a mentor on ABC’s “The Taste”. A committed philanthropist, Samuelsson co-produces the annual food and culture festival Harlem EatUp!, which supports Harlem Park to Park and Citymeals-on-Wheels.

“We see this collaboration as an experience where our outstanding chefs have an opportunity to learn from one of the world’s great culinary masters and as a culinary delight for all to experience something uniquely Saint Lucia,” said SLHTA CEO, Noorani Azeez.

The Celebrity Chef Dinner presented by Marcus Samuelsson will be an exclusive night of fine dining and entertainment. Tickets for the Gala event are XCD300/USD120 with limited seating. For more information visit: http://www.stlucia.org/food-rum-festival/