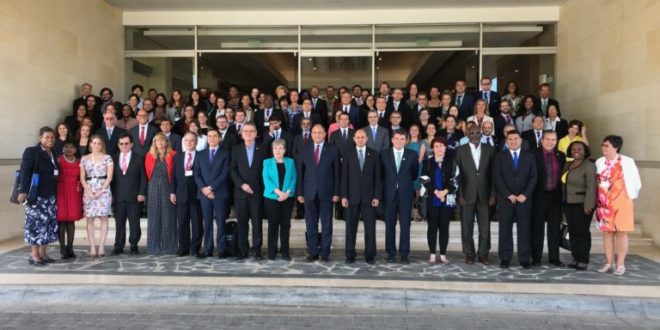 [Press Release] Saint Lucia has joined its Caribbean and Latin American Counterparts in endorsing the first ever legally binding Regional Agreement, that will address issues pertaining to access to information, public participation and justice in environmental matters.

This landmark Agreement was adopted by representatives of 24 Caribbean and Latin American Countries, at the Hotel Continental Real III in San Jose, Costa Rica after the final round of negotiations from February 28 to March 5, 2018.

The Agreement which recognizes the right to a healthy environment as a basic human right, sees environmental democracy as the only means of ensuring its full implementation.

With this Agreement the Countries affirm their unequivocal commitment to ensuring the right of people to participate in a significant way to the decisions that affect their lives and their surroundings. It espouses the principles enshrined In Principle 10 of the Rio Declaration that: “Environmental issues are best handled with the participation of all concerned citizens at the national level.”

Thus Saint Lucia and the other Countries through this Agreement have made the bold step of resolving at the national level, that each individual would have appropriate access to information concerning the environment, that is held by public authorities including information on hazardous materials and activities in their communities, and the opportunity to participate in the decision making processes.

Further, they have pledged to facilitate and encourage public awareness and participation by making information widely available as well as promoting effective access to judicial and administrative proceedings, particularly as regards redress and remedy.

At the final ceremony which heard remarks from the President of Costa Rica Luis Guillermo Solis, Executive Secretary of ECLAC Alicia Barcena, Minister of the Environment and Energy in Costa Rica Edgar Gutierrez, Chile’s Environmental Minister Marcelo Mena, Country delegates, Representatives of the public, Civil society as well as Environmental groups, it was recognized that this Agreement, in tandem with the Paris Agreement on Climate Change and the United Nations 2030 Agenda for Sustainable Development, would respond to calls from the region to build a world that is not only protective of human rights, but that gives due priority to the protection of the earth and its natural resources in a sustainable way.

The final Text of the Agreement which was produced in two official languages English and Spanish, give due prominence to the plight of vulnerable persons or groups who face particular difficulties in fully exercising their access rights because of conditions or circumstances unique to their national context.

It also guarantees a safe and enabling environment for persons, groups or organizations that promote and defend human rights in environmental matters, so that they are able to champion their causes free from threat, restriction and insecurity.

Some of the other highlights of the Regional Agreement include the creation of a Voluntary Fund to assist in the implementation of the many activities inherent in making it a reality. The establishment of a Conference of the Parties which will be convened by ECLAC no later than one year after the Agreement has entered into force, and which will promote the implementation and effectiveness of the Agreement.

The Regional Agreement on Access to Information, Public Participation and Justice in Environmental matters in Latin America and the Caribbean, marks the culmination of a series of negotiations which began in Santiago, Chile in 2014, when the signatory countries of the Declaration on the application of Principle 10 of the Rio Declaration on Environment and Development, adopted the preliminary document at the Fourth Meeting of the Focal Points.

The preliminary document was prepared by the Economic Commission for Latin American and the Caribbean (ECLAC) at the request of the signatory Countries, thus launching the negotiations on the Regional Agreement.

The Minister of Education, Innovation, Gender Relations and Sustainable Development The Honourable Dr. Gale T.C. Rigobert has pledged her support for the objectives and principles espoused in the Agreement, and continues to engage in dialogue at the Ministerial and Cabinet level with a view to ensuring that Saint Lucia is ready to institute the necessary legal and normative frameworks, to give effect to Principle 10.

The Minister was very pleased about the formulation of this Agreement as well as the consultative process in which it is was forged. Though the Minister was unable to attend the Costa Rica leg of the negotiations, her message was relayed through the island’s delegate to the Meeting, the Legal Officer in the Department of Sustainable Development, Ministry of Education, Innovation, Gender Relations and Sustainable Development, Ms. Kate Wilson.

“We applaud the recognition that the negotiations and ultimately this Agreement has given to public defenders of human rights in environmental matters; we appreciate your work as being indispensable to the democratic process and the successful attainment of sustainable development goals. We look forward to working closely with the Conference of the Parties to ensure that our commitment to implementing the various activities do not waiver…” she said.

The Agreement which will be deposited at the United Nations Headquarters in New York remains open to the signature of all the 33 nations which comprise Latin America and the Caribbean from September 27, 2018 to September 26, 2020 subject to the ratification, acceptance or approval of the States that have signed it.

The Ninth Meeting of the Negotiating Committee of the Regional Agreement co- hosted by Costa Rica and Chile, also saw a final Act in which the signatory countries call on all other Caribbean and Latin American Countries to sign and ratify this new Agreement as soon as possible. The Country delegates and others present are also called upon to begin the process of public awareness nationally, to ensure that the Governments, public and wider civil society recognize the significance of the Agreement and ensure its ratification, acceptance and entry into force.

Meanwhile, a report on the adoption of this milestone legally binding instrument is expected to be delivered by ECLAC at its very important 37th session slated for Havana Cuba from May 7-11, 2018.