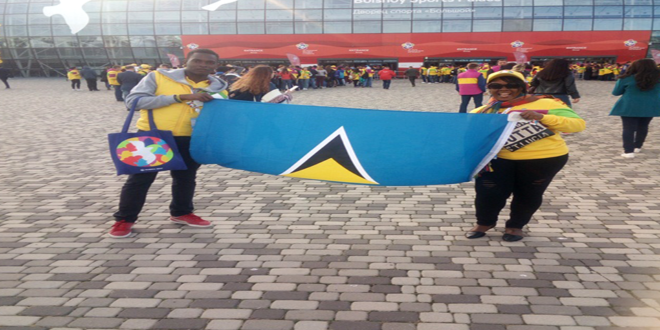 (PRESS RELEASE) – Held under the slogan “For Peace, Solidarity and Social Justice, We struggle against Imperialism, Honouring our Past, We build the Future” saw The 19th World Festival of Youth and Students hosted by the Russian Federation in the beautiful city of Sochi attracted 30,000 participants, Guest and Volunteers from more than 180 countries across all the continents from the 14th to the 22nd of October 2017.

Participants, guest and volunteers who gathered at one site, included representatives of Youth NGO’s, Youth Journalist, Creative and Athletic youth, Young design Engineers, Leaders of youth organisations of Political parties, Young University Professors and Leaders of student Governments coming together united by the power of dreams and the belief that our sincerity and kindness can break the ice of distrust and help rid the planet of injustice, wars and conflicts.

The Opening Ceremony of the festival held at the Bolshoy Ice Dome was given an official start by the Russian President Vladimir Putin where in his speech wished the 30,000 young people to be consistent and bold in their efforts towards their goals. He stressed to be daring and create our own future and to be bold enough to change this world to make it a better place. The President pledged that world leaders will do their very best for young people around the world from various countries, of various nationalities and religions who are united by a common feeling of values and goals, striving for freedom, happiness, peace and aspirations for bigger achievements of success.

The discussion programs were held at the International Broadcasting Centre included a variety of platforms for dialogue. Including panel discussions and open lectures on topical issues of youth policy and international relations, sports competition, as well as a number of cultural and creative events. The key topics included Culture and Globalization, Global Economy, Economy of knowledge, The development of public Institutions, Politics and International Security.

In the Olympic Park, there were many educational and entertainment events, meetings with famous Politicians, Scientists and young Professionals from all over the world. The Caribbean delegates had the opportunity to displaying a 5 minute cultural presentation where the different islands were introduced and backed up by live steel pan music.

We the St. Lucian delegates participated in the programs of Global Politics and Civil Platform and the Development of NGO’s.

We had the opportunity to engage in discussions relating to Global politics, local politics and Youth in Politics. Based on discussions, we learnt of effective ways that youth in St. Lucia can play major roles and be the change we want to see. Provisions must be made to engage the youth in decision/law making so we can be holistically prepared to elevate the nation for we are the future. During discussions we learnt that one of the countries has an effective youth government that has a platform and its own budget. We can look to have this implemented in our country so the Youth can be more effective in policy making and legislations.

Discussions on the 17th Sustainable development goals and Climate Change was also part of the lectures we partake in. In the Global Politics discussion on Climate change, we heard from speaker Anatol Leiven a Professor of Georgetown University of Foreign Service where he highlighted the impacts of Climate Change and How its affecting the world. “Climate change is real, this is our time to act now or else many countries will become uninhabitable soon” He alluded to. One of the Caribbean Delegates from Jamaica had the opportunity to meet with President Putin in a Round table discussion and brought to light the effect of Climate change on the Caribbean regions and how severe we are being affected. President Putin responded saying that he is aware of the veracity of climate change and he and the people of Russia sympathize with the recent tragedy we have experienced in the Caribbean and that the Russian Federation is always ready to provide support and assistance to those affected Latin American countries and that Russia supports any initiative to preserve nature.

On the development of NGO’s Abdelrahman Ayman, President of AISEC, spoke about youth volunteering in Europe and the importance of volunteering for youth also.

The 19th World Festival of Youth and students was an excellent platform for discussing the future which everyone faces. We saw how people from different countries can work together and finding common grounds on the issues that affects us most. This collision of ideas, cultures and minds is what the festival is all about and it left us with a great sense of oneness, with a belief in our future and the future of the world that we together can change the world for the better, for all of us.