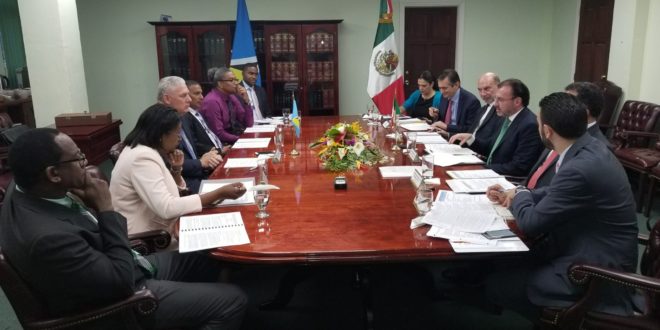 Saint Lucia and Mexico to Improve Cooperation in Key Areas

Saint Lucia and Mexico are embarking on new initiatives that will see an exchange between our countries in the areas of agriculture, tourism, security climate change and artisan training. These were just some of the opportunities discussed at a bilateral meeting during the visit to Saint Lucia this week by Mexico’s Minister of Foreign Affairs, His Excellency Luis Videgaray Caso.

Prime Minister Honourable Allen Chastanet hosted the meeting, in the Cabinet Room at the Office of the Prime Minister on Monday March 05th 2018, where our two countries set the tone for future joint action, especially as it related to improving trade and investment.

Prime Minister Chastanet opened the discussions by welcoming the Foreign Minister and his team to Saint Lucia, and thanking Mexico for its continued support to Saint Lucia since diplomatic relations were established in 1979.

Prior to the meeting Mexico’s Foreign Minister visited a Mexico supported water treatment plant in the community of Dennery North. The Dennery Water Supply Redevelopment Project is aimed at providing residents with a reliable water supply and entails water intake construction, installation of storage tanks and pumping facilities and upgrades to the distribution network.

With this Government project well underway the Administration is also looking to collaborate with Mexico on the training for the Royal Saint Lucia Police Force and Agro-processing. The Grouping also discussed regional and multilateral issues such as disaster risk management and climate change.

The visit by the Mexico Foreign Minister stems from discussions by Prime Minister Allen Chastanet and a Saint Lucia contingent during an official visit to Mexico in October 2017.

2018-03-06
Previous SEAWEED ENVELOPS NORTHWEST COAST
Next Will OKEU be privatized by UWP Government?