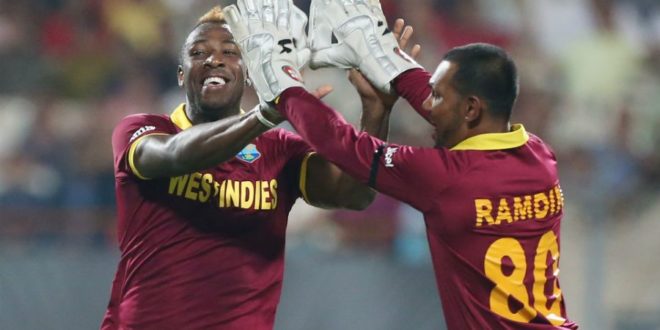 [ESPNcricinfo] Allrounder Andre Russell is set to return to the West Indies squad for the first time since he was banned for a doping-code violation in January 2017. He was named in a 13-man squad for the Hurricane Relief T20 Challenge, a charity match against an ICC Rest of the World XI. The match is being staged with the support of the MCC, ECB and ICC to raise funds to rebuild and restore five cricket venues in the Caribbean that were damaged by Hurricanes Irma and Maria last year.

The squad will be led by allrounder Carlos Brathwaite and will also feature openers Chris Gayle and Evin Lewis. All three of them, along with Russell, are currently playing in the IPL, which is scheduled to end on May 27, three days before the charity match at Lord’s.

“We welcome the return of the players who missed the Pakistan series and are delighted to recall Andre Russell to the squad, as we believe he will have a key role in our white-ball cricket. Denesh Ramdin and Keemo Paul keep their places after encouraging performances at both regional and international level,” the chairman of selectors Courtney Browne said.

Russell last played an international match in August 2016 and is currently in the middle of a productive comeback which began with him representing Jamaica in the Regional 50-over competition in February.

This isn’t the first charity match being staged to raise funds to repair the damage done by the two Category 5 hurricanes, Irma and Maria – the former being the most powerful recorded in the Atlantic since 2005 – which ravaged the Caribbean Islands last year, among other hurricanes through August and September.

In October last year, Darren Sammy and Kieron Pollard had led the Caribbean Select XI and Trinidad sides in a charity match that was aimed to directly help the communities that had suffered damages. This time round, the focus will be on the major cricketing centres that were affected, with all proceeds going into their rehabilitation.

Cricket West Indies CEO Johnny Grave said: “On behalf of CWI, I’d like to thank the players for their commitment to and support of this vital cause. We’re hoping to raise a significant sum from the Hurricane Relief T20 Challenge and are very grateful to the MCC, ECB and ICC, without whom this match would not be taking place.”