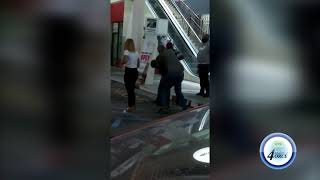 The royal Saint Lucia police force says physical force was necessary in a mask mandate arrest which has gone viral on social media. The incident involving a couple and two off duty policemen outside the JQ Charles Rodney bay mall is said to have been sparked by complaints of Non-compliance to the covid-19 protocols. According to law enforcement, one of the arresting officers was bitten during the attempt to detain the alleged offender.