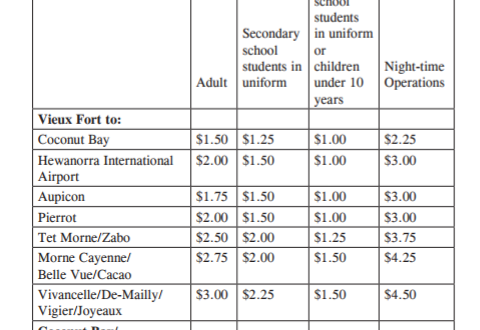 Commuters along the Vieux Fort to Belle Vue route are paying more for bus fare.

The Department of Transport has informed the general public of the fare adjustments to take effect on route 4b from December 4th, 2017, pursuant to the Motor Vehicles and Road Traffic (public omni-bus fares) (amendment) Regulations, 2017.

The Department also reminds public omni-bus owners and drivers, that a driver of an omni-bus shall not charge or demand more than the fares chargeable.

The Department reminds bus operators that the fares, in relation to the route should be clearly displayed inside the omni-bus.

Prices for adults along the respective routes from Vieux Fort to Belle Vue range from 1.50 to 3 dollars.

Earlier this year the drivers on the route who had raised objection to a number of issues, held dialogue with officials at the transport department to resolve these outstanding problems.