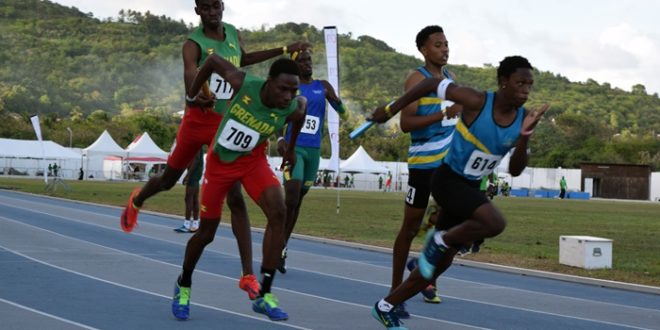 Vieux Fort, Saint Lucia July 24 – Another day of exciting Windward islands Schools Games action came to a close here Monday night with Dominica and Saint Lucia picking up vital wins despite having to settle for a goalless draw in their football engagement.

Micoud Multi-Purpose Court is the venue for the Volleyball fixtures and Dominica had a dominant showing against Grenada triumphing in three straight sets 25-12, 25-15,25-15. Host nation Saint Lucia also had a three sets victory scoreline but faced stiff competition from Saint Vincent and the Grenadines before going on to win  25-16, 25-20,25-23.

At the Vieux Fort multi-purpose court both Saint Lucia and  Dominica had lop sided wins over their opponents. In the first encounter of the evening  Dominica were 43-14 victors over the  Grenada team  with Alliyah Prince tallying 13 points five rebounds, Kaylee Clarke  contributed 11 points and four rebounds. For Grenada Chantelle Bartholomew  provided 10 points with three rebounds.

Hosts Saint Lucia looked impressive against Saint Vincent and the Grenadines  with a 54-14 advantage when a shower just past 11pm  brought mutual agreement from both camps that they would have ended play with  few minutes left to play. Mia George was dominant for Saint Lucia with 25 points  two rebounds, Kiana Nelson 13 points 11 rebounds with three assists and Jermiah Evariste had 10 points and 10 rebounds. The only stats of note from the Vincentians went to  Jada Peters, five points  four rebounds.

In football action at the adjacent  Philip Marcellin Ground Grenada opened the evening with  a 2-0 win over Saint Vincent and the Grenadines. Both goals from strikes in the first half . While the Vincentians failed to put away clear chances on goal early in the game Rickel Charles (19) and Leon Braveboy (22) scored the crucial goals that gave the Grenadians full three points.

Saint Lucia enjoyed greater possession in their match against Dominica but failed to convert. The second half was much less eventual and despite some opportunities being created by both team neither found the back of the nets. They settled for one point each.

Events on Tuesday include Netball, and male Basketball, both at the Vieux Fort Multi-Purpose court.