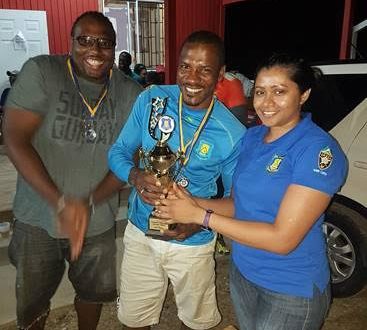 We the Executive and Tournament Committee of the Saint Lucia Shooting Association extend our heartfelt thanks for your continued support, participation and contribution to the President’s Cup Tournament 2018 held today Sunday February 18, 2018 at the Bordelais Shooting Range, Dennery.

Our Tournament was indeed a great success and like we have said and continue to say, Safety is of paramount importance. We continue to see a great improvement in sport shooters, who continue to support the Association in its activities, training and tournaments.

We had a day of fun and laughter as shooters from the various club on island put their skill and talent into competing for “Top IPSC Shooter” and “Top Target Shooter”. In that tournament we had four IPSC Stages and three Target Drills. We all had a wonderful day and at the awards ceremony the shooters received their medals and the Prestigious Cup.

We would like to say thanks to the following supporters/institutions:

The Tournament Committee for the planning and implementation of the tournament headed by the Tournament Director/President Mr. Lennox Mondesir;
The President/Saint Lucia Olympic Committee;
The Minister/Ministry of Youth Development and Sports;
Bordelais Correctional Facility;
The Royal Saint Lucia Police Force;
The Range Administration/Management Team;
The Range Development Team;
The Caterers;
The Media;
The Participating Shooters from the various institutions and clubs on island;
Special invited guest;
Spectators/visitors etc;
The Executive and members of the Saint Lucia Shooting Association;
Sponsors.

Special thanks goes out to the Administration personnel/ladies for their great assistance in the tournament. Our professional caterers who continue to provide the meals and drinks and assisting the Association in raising funds.

The various organizations and persons who gave of their time and effort in support of the tournament. If I forgot any person or institution, special thanks go to you as well. We encourage you to continue to support the Association.

We have seen the successes, competitive spirit and camaraderie in many of the shooting teams on island to include the Royal Saint Lucia Police Force, the Bordelais Correctional Facility and the Security companies who are committed to the sport. Also, to mention the Saint Lucia Shooting Association who have created the sporting arena for activities such as this, to bring out sport shooters for the international scene. We were grateful for the veteran shooters who made a comeback to the shooting sport and were indeed impressive, still holding their shooting form.

Congratulations goes out to all the participating shooters, you have all done well. What a show it was, and this was all done in a safe environment.

We all have done tremendously well, and we will continue to raise the standard of sport shooting in Saint Lucia. The Association is indeed very grateful for your support.

Once again, we are thankful for you for a job well done.

The results of the tournament are as follows: