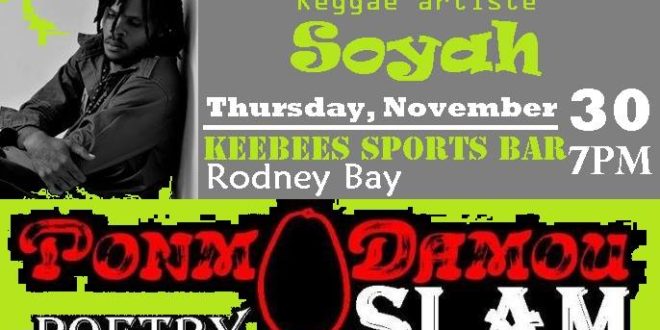 (PRESS RELEASE) – Which musician is not a lover of music?

When that love is mixed with positivity and a global genre such as reggae, a rising star is birthed.

Jervais Antoine better known as Soyah is that rising star which will the featured artist at the final Ponm Damou Poetry Slam for the year. The reggae artist will be backed by the band Sceptre.

Soyah cites the music of Garnet Silk, Bob Marley and 2pac as a few of his early influences.

He has participated in song competitions such as Guinness Freestyle and Caribbean Youthfest.

His name Soyah is an acronym for “Son of Jah” revelling his spiritual consciousness and health habits.

After a chain of outstanding performances at Starklass and UnityFest 2011 in which featured Tarrus Riley and Etana, Soyah released the hit single “Mo’ Money” the collaborated single with “JVee” of the “track slammers” on June 5, 2012.

Soyah is now recording with CW Productionz and currently working on his first album “The Real Vibe”.

The Ponm Damou Poetry Slam is a monthly event produced by Ponm Damou Kreations arts and entertainment company. This production which is held every last Thursday of the month sees poets going head to head in three rounds of poetry competition at which the top poet wins a prize for the night donated by PhoneBay Inc.

The musical talent of Soyah will combine with the literary bravado of the poets of the night for an enthralling engagement. The show is free to the audience and takes place on Thursday November 30 at Keebees Sports Bar and Grill, Rodney Bay. Showtime is 7pm