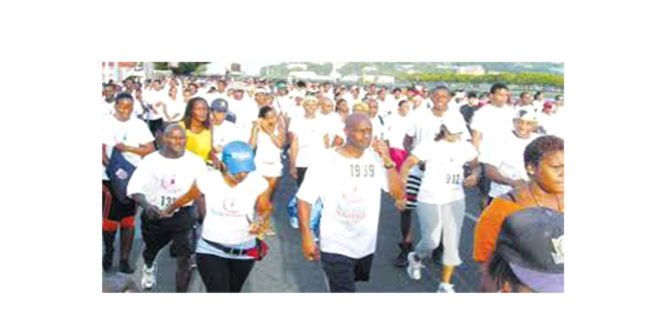 PRESS RELEASE:-Castries, Saint Lucia, August 2, 2017 – Saint Lucia’s biggest participatory sporting event is set to come off this month, and organisers are anticipating another record for registration, with the island’s number one telecommunications provider now on board. Flow officially signalled its support for the 2017 Pinehill Funwalk during the official launch for this year’s walk as the event was launched during a press conference hosted by Peter & Company Distribution (PCD) on Friday last.

With thousands expected to take part in the activity set for August 27th 2017, the keenly anticipated Pinehill Funwalk 2017 will be held under the theme, Walk To Make A Difference. The walk will have two main beneficiaries. The nation’s largest distributor will continue to benefit the World Pediatric Project, a group of experienced medical doctors assisting critically ill children in need of life changing surgeries. Additionally, the thousands signing up for the 18th edition of the Funwalk will also help the Saint Lucia Blind Welfare Association.

Aside from walking for health, fitness, and fun, there will be over $30,000.00 in prizes, including trips to New York, mobile phones, weekend passes and dinners to be won. Flow has pledged to encourage greater participation in this year’s activity, including the involvement of the company’s staff, their family and friends. Interested persons can register for just $25.00 at Peter & Co., Wet & Cold, CFL, RCI, and Flow Baywalk.

“We are excited about contributing towards the overall enhancement and success of the famous Pinehill Funwalk through the use of our services. Our brand, Flow, speaks to family, passion, love, entertainment. These are the same attributes that one can use to describe the Pinehill Funwalk, so supporting such an event ties it with our brand personality.

“As it pertains to corporate social responsibility; sports and health come under our core pillars. With Saint Lucia suffering from high rates of non-communicable diseases, any contribution we can make to help promote healthy lifestyle is commendable. So to PCD, Pinehill participants, and fellow sponsors, kudos for continuously putting on a successful event. This year, Flow hopes to make it even more exciting!”

Pinehill Funwalk 2017 will begin with warmup exercises from 6:00 a.m. on Sunday August 27th, near the Sab Playing Field at Vigie. Walkers will go up the John Compton Highway to Gros Islet, ending at the Pigeon Island National Landmark. Among the partners for this year’s walk are Radio Caribbean International (RCI) – which has been a partner from inception in 1999, and the Ministry of Health and Wellness, which will host a health fair at Pigeon Island.