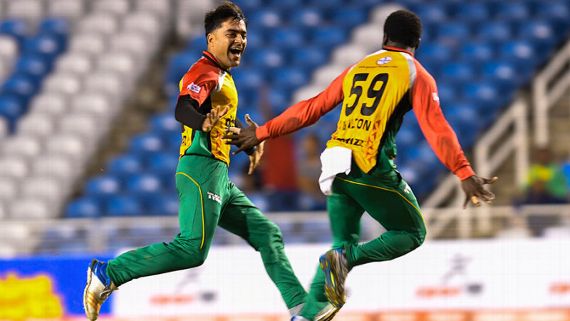 In a rematch of the 2016 CPL final, Guyana Amazon Warriors exacted revenge behind Rashid Khan‘s hat-trick and Luke Ronchi‘s cold-blooded 70 off 33 balls to knock out the defending champion Jamaica Tallawahs at Brian Lara Stadium. Tallawahs were on the back foot throughout Amazon Warriors’ chase of 169 courtesy a splendid second-wicket stand of 67 in 5.1 overs between Ronchi and Chadwick Walton, before victory was sealed by a six from Assad Fudadin with 13 balls to spare.

For the second night in a row, the decision to open the batting with a player who hadn’t played through the tournament produced underwhelming results. On Tuesday night, it was William Perkins with Trinbago Knight Riders and on Wednesday night, it was Kennar Lewis with Tallawahs.

The Tallawahs management decided to drop Glenn Phillips despite four 30-plus scores in seven innings in the competition. Captain Kumar Sangakkara said at the post-match presentation that the reason to include Lewis was because the Tallawahs “had gone soft in the Powerplay”. Lewis managed 15 before he was bounced out by Rayad Emrit, caught at deep square leg in the fifth over.

The riddle in the middle

Sangakkara and Andre McCarthy, a consistent performer for the Tallawahs this season, were pushed down two spots. Rather than giving their two leading scorers the most time to bat, their delayed entry may have cost the side 20-plus runs, particularly since Sangakkara finished unbeaten on 57 off 38 balls.

Steven Jacobs benefited most. The offspinner pinched two early wickets in the seventh over, snapping up Lendl Simmons at cover for 34 and then had Mahmudullah four balls later as his sloppy swat to the leg side found Veerasammy Permaul at midwicket to make it 59 for 3.

On Wednesday night, Rashid created CPL history with the tournament’s first ever hat-trick.First was McCarthy, beaten driving by a googly to begin the 15th over. Jonathan Foo lunged at another googly next ball and was beaten easily as the ball knocked into leg stump.

Rovman Powell’s dismissal was the worst stroke of the three, teased into chasing a flighted delivery well outside off that spun back sharply to hit off stump. At 116 for 7, Tallawahs were left with a struggle to get to a defendable total on a night where heavy dew made gripping the ball increasingly difficult as the night wore on.

The Amazon Warriors’ playoffs chances were hit when captain Martin Guptill left the tournament due to a family emergency. But the Warriors have seemingly been galvanized with the arrival of his replacement Ronchi, who has scored more runs in three matches (149) than Guptill did in the first seven (142).

A harbinger of the savage display to come arrived on his third ball when he effortlessly lofted Mahmudullah back over his head for six. After the Powerplay, Ronchi feasted on poor angles offered by the Tallawahs bowlers, as he used nothing but wrist to whip Rovman Powell for a pair of sixes off the first two balls of the seventh over. Kesrick Williams wilted under pressure too. Ronchi soon brought up the second-fastest fifty of CPL 2017, off 20 balls.

Ronchi finished with 70 off 33 balls, setting up Thursday night’s showdown with Trinbago Knight Riders for a chance to return to the CPL final for the fourth time in five seasons.