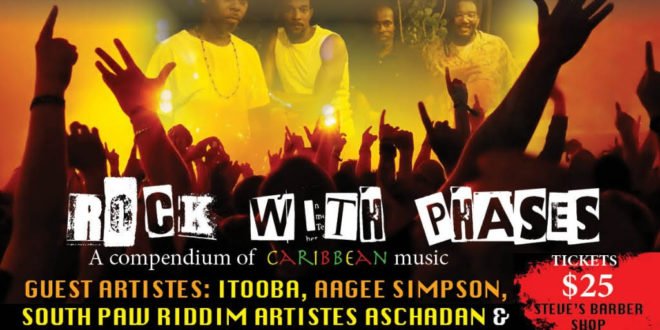 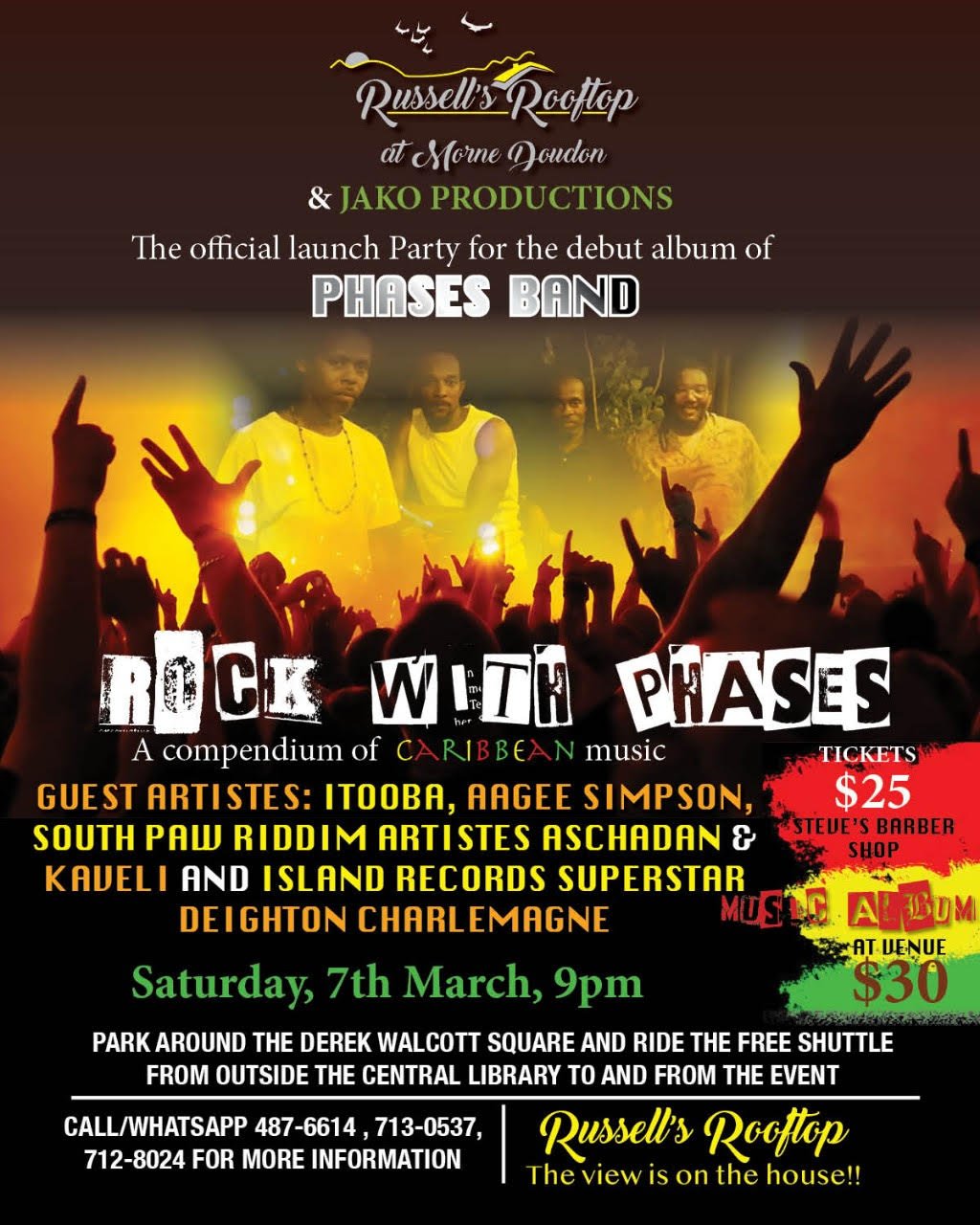 Vieux Fort’s Phases Band is pleased to announce the release of its debut album, Rock with Phases. Recorded at Jako Studios and engineered by Marlon Florent, Rock with Phases is a fourteen-track compilation unveiling the full palate of Caribbean music and suggestive of the band’s versatility and eclecticism.

In a voice that recalls none other than Sanchez, and music reminiscent of Third World and Steel Pulse, the six reggae tracks on the album are sure  to appeal to both young and old, both those who want to enjoy their music in quiet meditation or in celebratory dance, both lovers of reggae and lovers of dancehall, and both Rastafarians and non-Rastafarians, for the tracks move from soulful love ballad, to lover’s rock, to conscious roots reggae, to upbeat reggae-dancehall; the music danceable, hypnotic, incantatory.

The rest of the songs are a fusion of Caribbean sounds and truly represent a creole music fiesta, a compendium of Caribbean music. The groovy soca, We Like It, marries kompa, cadence, soca, and Latin to create a memorable track that is equally at home in a jazz festival as in a soca jam.  In Salsa Beat, Latin is infused with soca and cadence to give us a delightful, sophisticated song that may be the making of a sub-genre unto itself. For those who want to party, wine, and jump up, they need look no further than Rock with Phases. The album presents party songs in all Caribbean flavors. There is cadence, zouk, bouyon, bellaire, Latin, soca and reggae-dancehall. For folk lovers, the album doesn’t disappoint, for Phases dug into St. Lucia’s folk music archives, pulled out Tiwè Lanmen’w, a classical St. Lucian folk song, and modernized its musical arrangements for wider appreciation.

Originally from Dominica, Wayne Benoit is a veteran musician who has been performing with bands since his late teens. He has performed with South Tent, Midnight Groovers, and First Serenade with which he toured the UK and the Virgin Islands.

Gary Mongroo, who was raised in St. Lucia, said he was born a musician, or born to be a musician. His musical journey started at the age of six when he used to join a neighborhood folk band, singing and trying to play percussion instruments. Around that time, he was making so much noise beating metal drums, buckets, anything that could imitate the sound of a drum set, that his mother got him plastic buckets to beat on. By the age of ten he had fashioned a drum set out of plastic buckets. With his drumming and a voice reminiscent of Sanchez, Gary has performed with Ronald “Boo” Hinkson and the Tru-Tones in Puerto Rico and in New York alongside the likes of Beres Hammond and Machel Montano. Besides Tru-Tones, he has served as drummer and lead singer for such bands as Apex, DN5, and Magic Circle.

In its six years of existence, Phases has developed a reputation of leaving no audience unmoved. Wherever the band performs, audiences can’t get enough of its music; people, no matter their age, are compelled to dance. Phases have made grown men weep, and at Micoud Bon Tan, which is right next to a cemetery, the band was accused of raising the dead. Well, Rock with Phases is likely to do no less.

With the release of its album, Phases will embark on a national, regional and international tour. The first stop on the national tour will be at Russell’s Rooftop, Morne Doudon, Castries, on March 7.  The tour will then move to Rodney Bay at Keebees Sports Bar & Grill on March 14, and then to Vieux Fort at Clear Sky Restaurant on Saturday March 21, and then to Soufriere and Dennery.

Phases is managed by Jako Productions, a cultural and entertainment enterprise that seeks to give artistic expression to St. Lucian culture and to promote that culture worldwide. Jako Productions has been pursuing this mission through its website, the publication of books and magazines, the production of music and film, the management of artists and bands, and the staging of musical, literary and other cultural events. Besides Rock with Phases, Jako Productions has produced four other albums, including the award-winning albums Freedom by Sylvester “Itoobaa,” Peter, and Can’t Stop Us by the Fourth World.