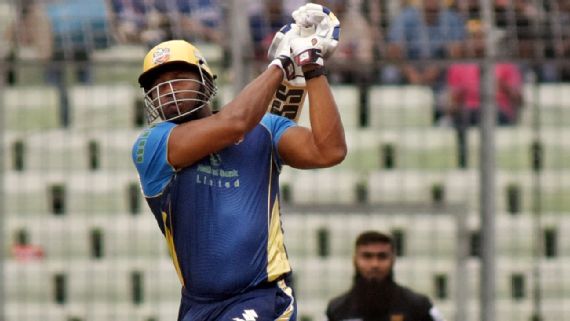 Kieron Pollard lofts one en route to his unbeaten half-century

Dhaka Dynamites went to the top of the points with a crushing 68-run win over Rajshahi Kings in Mirpur. Evin Lewis was adjudged Player of the Match for setting up their big score but there were also meaningful contributions from Kieron Pollard, Shahid Afridi and Abu Hider.

Dhaka racked up 201 for 7 in 20 overs after being put in to bat, the first 200-plus score in the Dhaka-leg of the tournament this year. Rajshahi in reply were bowled out for 133 runs in 18.2 overs, sinking to fifth place following their fourth loss in six outings.

Lewis quickly off the blocks
The first wicket partnership lasted just 4.1 overs but Afridi and Lewis added 53 runs in that short time. Afridi made 15 off eight balls and then Jahurul Islam, promoted to No. 3 after his heroics in the previous match, struck a four and a six in his six-ball 13. But it was Lewis who kept up the scoring rate soaring with his 38-ball 65 that had ten fours and a six. He fell in the tenth over and at 99 for 3, Dhaka were set for a big score.

Pollard finishes in style
Rajshahi took some wickets in the middle but their fielding let them down. They dropped four catches in total, Nadif Chowdhury and Pollard being the beneficiary twice each. While Nadif didn’t capitalise, Pollard did, big time. Two of his sixes went high over long-on and the third over midwicket, which gave him his 500th six in T20s. He also struck five fours in his 25-ball 52 and shared a crucial 62-run sixth wicket stand with Kumar Sangakkara, who contributed 28 off 22 balls.

Afridi and Hider trip up Rajshahi
There was no respite for Rajshahi even when they batted. Left-arm pacer Hider removed Rony Talukdar and Samit Patel early, and while Zakir Hasan and Mominul Haque looked to get the chase back on track, Afridi stepped in; he ended a 49-run third-wicket stand for his first scalp of the afternoon – Mominul. Zakir, who top scored with 36 off 23 balls, was Afridi’s second wicket before he also added Mushfiqur Rahim and Mehidy Hasan Miraz to his haul to complete his second four-for in the tournament in three games. Shakib Al Hasan took two wickets and Mohammad Saddam had one before Hider came back to finish off Rajshahi.