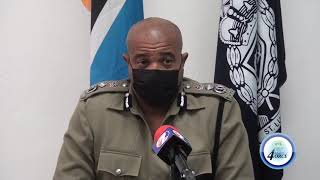 POLICE PELTED WITH BOTTLES BY CURFEW BREAKERS IN SOUFRIERE

A bar owner and several people are now in police custody in the wake of a brazen attack on law officers in Soufriere on the week-end. The police officers who were attempting to break up a social activity during curfew hours, were on the receiving end of bottles and stones from an angry crowd. Now top cop Milton Desir has issued a stern ultimatum to the law-breakers to turn themselves into the authorities by noon Tuesday.