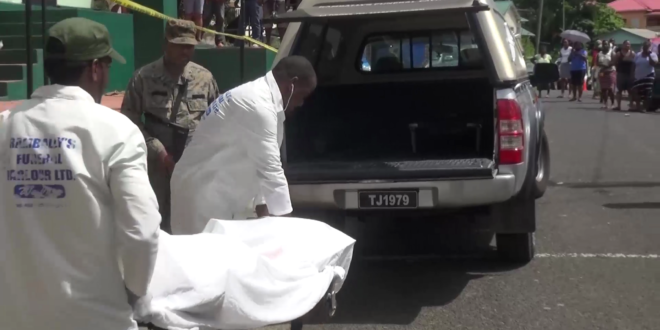 The body of Andre Nelson being taken away by coroners

Andre Nelson has been identified by police investigators as the man killed during a deadly altercation in Ti Rocher, Micoud October 30.

Nelson was shot and killed by the proprietor of a local Ti Rocher convenient shop sometime after 7:30 am.

It is believed that Andre Nelson approached the shop where he met the proprietor inside. Unconfirmed reports claim Nelson was armed with a machete and attempted to rob the shop. The owner confronted Nelson and a struggle ensued. The shop keeper was reportedly assaulted and sustained several injuries including a gash from the machete to his hand.

Residents reported hearing multiple gun shots being fired at around 7:45 am. Andre Nelson was discovered unresponsive by EMTs sprawled out inside the shop.

Police investigators have collected a statement from the shop keeper as part of investigations.

Ti Rocher residents say the deceased and shop keeper and had a brief contentious history.