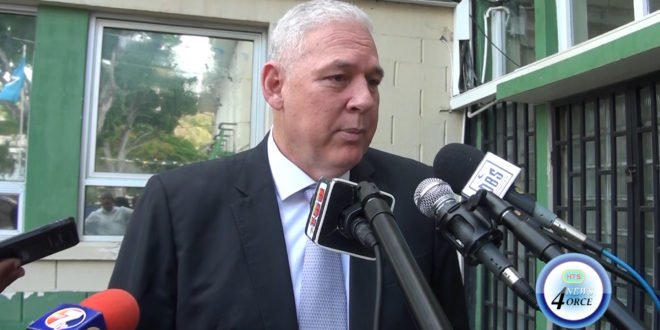 The prime minister writes: “Should our offer not be accepted, we will have to examine our legal options in order to ensure that we as a Government can function, can meet our obligations and can continue providing essential services to our citizens.” He gives a final deadline of June 1, 2020.

Here is the complete letter reprinted in full:

“As you know, the Government of Saint Lucia, through a Cabinet-appointed Ministerial Sub-Committee (with support from the Department of Finance), has been engaged in numerous discussions with the Trade Unions since 2nd April, 2020.  This was in an attempt to arrive at a consensus position on the issue of the proposed reduction in the monthly cash outlay by Government for salaries of civil servants in the face of reduced revenue collection and contraction in the economy, directly caused by COVID-19.

Prior to those discussions, the Government had taken steps to meet with all key stakeholders in the Private Sector to prepare for the anticipated unprecedented realities of dealing with the economic fallout from this global pandemic.   As you would no doubt have seen or read from international news reports, the COVID-19 pandemic is wreaking havoc on all economies, whether small or large, and the economic outlook worldwide is bleak.

Although we have had consistent growth over the last four years in our economy and a substantial reduction in debt (which has no doubt accounted for our ability to respond as well as we have to this crisis), our initial projection of a contraction in our GDP for the fiscal year 2020/2021 was 10%.  This estimate has now been revised downward by the Eastern Caribbean Central Bank (ECCB) to be 20%.  If accurate, this means that tax revenues will be reduced by a further $150 million.  Compounding this situation is the fact that under normal circumstances we would expect all our bonds and Treasury bills to be rolled over, but due to the impact of COVID-19, some bond and Treasury bill holders urgently need their monies now.  Of the approximately $700 million in bonds and Treasury bills which are to fall due this year, we expect about 25% of these will be redeemed (requiring an additional $175 million).  The impact of the two situations described hereinabove will result in an unbudgeted shortfall of $325 million.

The most recent revised projections show that the pickup in tourism will be further delayed and the projected economic fallout will be worse than initially thought, which will result in a further reduction in revenue.  The scaling down and in some instances, the complete shutdown of commercial activity on island, has meant that the Government has had to take certain immediate actions in order to protect the health, safety and security of the citizens of Saint Lucia, all of which have come at a cost, which you will appreciate was not provided for during last year’s budget allocations.  These costs include increased healthcare costs, the food and accommodation arrangements for the quarantine and isolation facilities which were established, the provision of free medical attention for those infected with the virus, free testing for persons suspected to be infected, the costs associated with the accelerated opening and continued operations of the Owen King European Union Hospital, the “retrofitting” of the Victoria Hospital as a respiratory clinic and the expenses of maintaining and operating two hospitals simultaneously, along with all other ancillary expenses associated with this pandemic.

The Government of Saint Lucia recognises its obligation to public sector workers and to all in the civil service who play an enormous role in the functioning of Government and in many cases, in providing essential services critical to our daily living.  In fact, this pandemic has highlighted just how valuable our civil servants are to us all, in particular, our frontliners such as doctors, nurses, police and fire officers, customs agents and also our teachers, who are trying to keep our children on pace with their school curricula, in spite of very challenging circumstances.  However, we as a Government also have a responsibility to all our citizens, including those in the private sector as well as those who are retired, unemployed and those who are on the poverty list.  Thousands of persons all over the island have been adversely impacted – some have lost their jobs entirely, in many cases without pay, others have been given reduced working hours and are now receiving less pay and the majority of the working population have generally realised reduced earnings from March 2020.

In an attempt to meet our obligations for the safety and well-being of our citizens, the Government has embarked upon a Social Stabilization Plan, which includes the Income Support Program, undertaken in collaboration with the National Insurance Corporation (NIC), to provide relief to persons who have lost their jobs or source of income.  The Government has also renewed its efforts to creating an enabling environment for economic activity, in particular, job creation, so that persons can resume employment and take care of themselves.  This income and consumption will also create jobs and opportunities for other service providers and in turn generate revenue for the Government.

In the recent budget presentation, the projections for the fiscal year 2020/2021 included total recurrent revenue of approximately $1.019 billion (with a tax revenue of $925 million) and total expenditure of approximately $1.697 billion, leaving a financing gap in excess of $560 million.  In anticipation of the economic fallout, and prior to the budget presentation, the Minister of Finance and his team worked with the Caribbean Development Bank (CDB), the World Bank (WB), the International Monetary Fund (IMF), the ECCB and our local banks, as well as the Government of Taiwan, and negotiated approximately $500 million in loans to fund this gap.  However, as explained above, the deterioration of the economy means that the Government still needs an additional $325 million to meet its obligations. The months of April and May 2020 have confirmed the most recent projections and with COVID-19 continuing to pose a threat to the world economy and to ours, the likelihood of any significant improvement for June 2020 seems unlikely.

Through budget cuts and additional funding, the Government is in the process of securing an additional $275 million, but still has a shortfall of $50 million.  The Government has been exploring all measures to avoid a reduction in the civil service and any permanent salary cuts, however, we would need the urgent and full cooperation of the Trade Unions in order to alleviate this crisis.  We have therefore offered the Trade Unions the following proposals:-

In an attempt to mitigate the impact of such a proposal, the Government has engaged the financial institutions to provide a three-month moratorium for persons with mortgages, loans and other credit facilities.

We reiterate that the intention is not to enforce a pay cut, but rather, through the mechanism of a bond (Treasury bill), to effect a deferral of part of the salary to a later date.  This means that those public servants at grades 7 through 21will not ultimately experience any loss in income, but rather will receive an additional 3% in interest on the said sum.  You will note that this rate of interest is higher than the current bank interest rate of 2%.

We had hoped through our many discussions with the Trade Unions that this proposal would have taken effect in April 2020 and would have ended in June 2020.   However, not having reached any agreement with the Public Sector Unions, the Government had no choice but to use debt (overdraft and other debt facilities) to pay salaries for the month of April 2020.  Not only is this an unsustainable option, but it has come at the expense of many long-standing Government programmes and caused us to delay payments due to service providers and small contractors.  The local banks have reached their limits in terms of Government debt, making the option of seeking additional financing facilities difficult, if not impossible.  It should be noted that having to pay full salaries and wages for the month of May 2020 will further exacerbate this situation.

This situation requires practical thinking and prudential management of limited resources at this time. COVID-19 is an unprecedented and catastrophic crisis and we will only get through it if we all act in the common interest of our country.  Our proposal is intended to allow us to meet our obligations to our employees, to our creditors and to our citizenry as a whole, through the continuation of social support programmes and we are endeavouring in the process, to ensure that no jobs are lost in the Public Sector.

In light of the above, the Government makes a final appeal to all its employees and their Trade Union representatives to consider and accept the offer made herein and in our previous discussions with the Trade Union leaders. Should our offer not be accepted, we will have to examine our legal options in order to ensure that we as a Government can function, can meet our obligations and can continue providing essential services to our citizens.  Therefore, we cannot go beyond 1st June, 2020 without a firm decision being made on this matter. Unlike thousands of persons in the private sector, with this offer, public sector employees are not at risk of losing their jobs and their salaries are not to be cut.  However, we all have to make some sacrifice to ensure that the Government can cope with this catastrophic global economic crisis and minimize further impact on our country.

We remain hopeful that consensus can be reached amongst all public sector workers on this proposal, as it remains the best and most beneficial option to deal with the immediate cash shortfall which the Government currently faces.   As time is now of the essence, we look forward to a reply from you no later than Monday 25th May, 2020.

The prime minister’s letter was copied to: