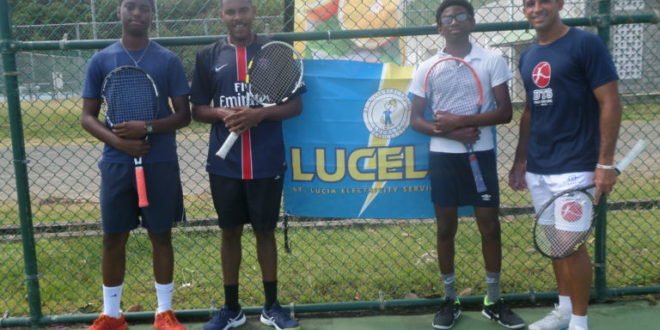 The main draw started yesterday where the top players meet for the championships.

In the girls 12s Iyana Paul seeded at as #3 from the Balata Combined School defeated Mahkya Suffren from the Dame Pearlette Louisy School in straights sets 4-0 4-0. Paul will face Alysa Elliott from the St. Joseph’s Convent in the semifinal round which will be played today.

Latoya Murray from the Grande Riviere Primary School defeated Amelia Rosemond in straight sets 4-2 5-3. Murray will face Alannah Bousquet from The Montessori Centre today in the other semifinal.

In the boys 12s category Orlando Augustin from the Dame Pearlette defeated Anselm Mathurin from the Momtessor Centre without any difficulty 4-0 4-1. Augustin former member of the National Team and Participant in the Caribbean Junior 12 & under Championship will face Jonas Sylvester in the final. Sylvester from the Montessori Centre defeated Brandon Eugene from the same school in straight sets 4-1 4-1.

In the girls 14s main draw Amelia Rosemond from the Monchy Primary School was defeated by Alysa Elliott from the St. Joseph’s Convent in straight sets 6-1 6-0. Elliott advances to the semifinal to face Jorja Mederick. Iyana Paul defeated Latoya Murray in a very close match. Paul barely won the first in a tie break 7-6 (7-3) and went on to win the second set 6-1.

George who lost to Charlemagne in the round robin phase of the tournament was able to pull it together to secure a spot in the semifinal to face Orlando Augustin. Corey Charles lost to Orlando Augustin 6-0 6-0. Semifinal for the boys 14s will be happening today.

Aviona Edmund from St. joseph’s Convent displayed great talent against Mya Eugene advancing to the final of the girls 16s winning in straight sets 6-0 6-3. Edmund will face Jorja Mederick from the Leon Hess School in the final who defeated Nadjema Morille from the same school.

In the most exciting match of the day we saw national players Maxx William and Aidan Bousquet take on the duo from Martinique Alexandre Gaetan and Pascal Laurencine. Talented William and Bousquet only 14 years old played vigorously against their counterparts. They lost after putting on a great fight 6-4 6-1. Pascal and Gaetan were also very excited to play the young juniors.

The Tennis Association wishes to thank Peter & Company and Lucelec for their support in putting on this national event.