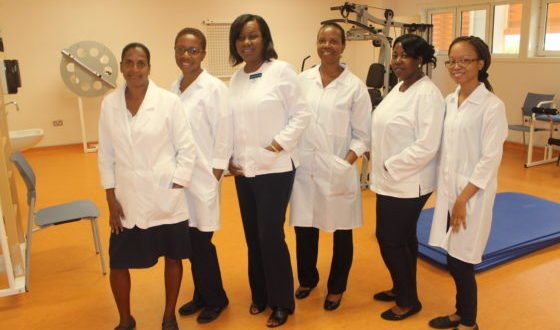 Physiotherapy Unit moves to the OKEUH

Victoria Hospital continues to implement the phased transitioning plan to the Owen King EU Hospital  (OKEUH) with this week’s official transfer of  the Physiotherapy Unit to the new medical facility.

The Ministry of Health has said that inpatient services will still be provided at  Victoria Hospital.

According to the ministry, come  the week of March 26, 2018,  the Physiotherapy Unit expects to be settled and ready to receive clients at the OKEU Hospital.

Senior Physiotherapist, Doctor Sibyl Edward, indicated that clients were informed of the temporary closure of the department to facilitate the transfer of both staff and equipment to the new hospital.

“Patients and clients who access the service at the Victoria Hospital and will be accessing the service at the new unit at OKEUH will be pleasantly surprised with the space and equipment housed at this new unit, ” Edward asserted.

She expressed relief that the move has finally happened.

“The move has been a long time coming and staff, I would say,  are very excited, because after many years of planning and training we are finally at the Owen King EU Hospital,” Edward observed.

Brenda Calixte, Executive Director at the Victoria Hospital said the move represents a tremendous amount of work and planning.

In January the dialysis unit became the first unit to be transferred to the new hospital.

“We are very excited because we have been working so hard at Victoria Hospital to transition to the OKEU Hospital and now we were able to get in renal dialysis and we now have physiotherapy coming on. So it’s much excitement for us, because the physiotherapy department is a larger department at OKEUH from what we had at Victoria Hospital. So that would help us at least to get in more patients,” Calixte explained.

The new physiotherapy department has a well equipped gym, separate cubicles to see patients and a splint room.

In addition, patients with injuries to the hand, upper and lower extremities will now be seen in a separate area.

Doctor Edward stated that the increased space and better equipment will translate to better patient care and outcomes.

“We would like to take this opportunity to not only thank the European Union for this wonderful department, but also management, because over the years it was quite challenging, training and preparing the various documents to get here and being here right now – we need to say thank you to all concerned,” Edward said.

Executive Director, Brenda Calixte, indicated that the Out Patient Department is the next department scheduled to move to the new hospital.

“The Out Patient Department at Victoria Hospital are those persons we have that were hospitalised before and had seen the doctor and probably have to come back to see the doctor. So they will be operating at OKEU come April,” Calixte told the Communications Unit of the Ministry of Health.

While transportation arrangements are being finalised with the Ministry of Infrastructure, a temporary arrangement has been put it place with a bus leaving every hour on the hour from the Derek Walcott Square to the Owen King EU Hospital.

Physiotherapy clients have been asked to call the Victoria Hospital or 458-6754 for appointments.