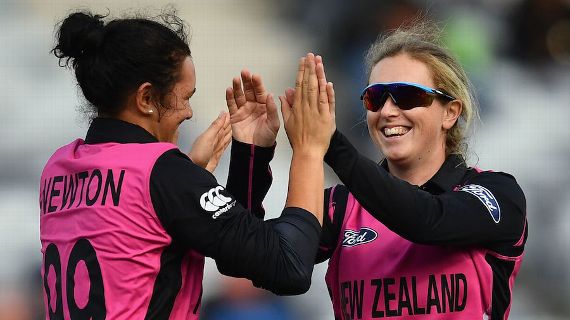 Just the way they had welcomed West Indies on their shores – with a one-run win in the first ODI – New Zealand sealed the T20 series in similar fashion in New Plymouth, and kept the visitors away from their first win of the tour. Chasing 135, West Indies needed five to win from the last over with six wickets in hand but offspinner Anna Peterson took two wickets and added a run-out on the penultimate ball to add to West Indies’ woes. When they needed three off the last ball, Merissa Aguilleira failed to connect to a flat delivery and only managed a leg bye.

West Indies showed their intent by making captain Stafanie Taylor open along with Hayley Matthews, and they were scoring at more than run a ball before offspinner Leigh Kasperek trapped Taylor lbw for 14. West Indies wobbled further when Kasperek struck again in her next over and 17-year-old Amelia Kerr – the fifth bowler to bowl by the seventh over – had Matthews caught for 14. Deandra Dottin’s boundaries and Aguilleira’s patience put the chase back on track by taking them past 70 in the 12th over but Kasperek had Dottin also stumped, in the same over.

Even as Suzie Bates kept rotating her bowlers, Aguilleira and Kycia Knight scored briskly for the fifth-wicket stand and brought the equation down from 60 off 48 balls to 12 from 12. They collected seven from the penultimate over but Peterson conceded only three in the last over and stole the win. Kasperek finished with 3 for 31 and Peterson ended with 2 for 25.

Earlier, West Indies opted to bowl but saw openers Sophie Devine and Bates race past the 50 mark in the sixth over, after Devine collected 18 runs off Shamilia Connell in the third over. Devine was soon bowled for an 18-ball 41 by Matthews and West Indies pulled things back from there.

Even though Bates moved along to score her 16th T20I half-century, she didn’t find much support with only two other batsmen – Maddy Green and Amy Satterthwaite – reaching double-figures. Matthews collected two more wickets for her 3 for 24, Dottin took 2 for 23 while Taylor ended with a miserly 4-0-19-0 to restrict New Zealand to 134 for 7. They lost four wickets in the last 16 balls but Bates struck a four on the last ball of the innings to remain unbeaten on 52, which eventually turned out to be useful runs.

The remaining two T20s will be played on Thursday and Sunday.