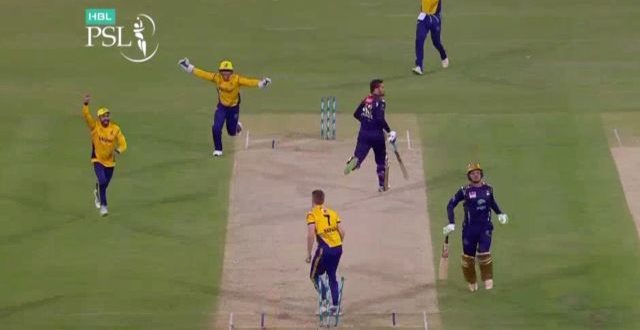 The silly and the sublime came together in Lahore for a riveting finish as Peshawar Zalmi booked their place in the second qualifier and increased their chances of becoming back-to-back champions.

But with 24 to defend off the last over, the result should have been straightforward, right?

Liam Dawson, the left-arm spinner, was pressed to action with all the other frontliners having bowled out. Anwar Ali took strike and managed an unseemly top-edge that beat Darren Sammy, who has been carrying a knee injury for almost half the tournament and just could not run after the ball.

Anwar strode down the track, unleashed every last bit of his power, made the ball disappear over long-on and long-off, and had the defending champions scrambling.

Where the game was won

Considering how it all turned out, there is an argument to be made that even fate cannot deny Hasan Ali, that irrepressible fast-bowling force. He took a wicket off his very first ball of the match, a pearler that straightened after pitching to claim Asad Shafiq’s outside edge through to slip’s waiting hands. Then, he gave away only two runs in the 18th over, outsmarting Thisara Perera with slower balls and outclassing Anwar by hitting the deck.

The execution was top-notch but for a 24-year old to have such clarity of thought in such a high-pressure situation is unreal. Hasan knew that change of pace had a higher probability of success against a big-hitter. But when the strike turned and he was faced with a new batsman, who would have no idea that this pitch was offering extra bounce, he cranked it back up. There were three wild swings. None of them connected.

That Hasan had enough runs to work his magic was due to Dawson. So nearly the villain in the dying moments, he was actually the only batsman who played with any measure of control against a Quetta bowling attack that was consistently threatening. While many of his team-mates kept premeditating shots and walking back to the pavilion, he simply responded to what came his way. So good were his instincts that, on 19, he kept out a grubber that seemed destined to hit the stumps. So pristine was his timing that he struck a wide yorker – after making room room down leg – to the third man boundary.

Dawson’s 62 off 35 balls was exactly the tonic an innings floundering at 86 for 5 sorely needed.

Who (almost) won it

Chases of 158 on a true pitch had no business being anything but one-sided, and Quetta had done ever so well to earn the mantle of favourites. They compensated for the loss of Shane Watson and Kevin Pietersen, who chose not to come to Pakistan, with a splendid display on the field. Left-arm seamer Rahat Ali took 4 for 16 – nearly his best ever performance in a T20 game – but by around the penultimate over of the match, he would have felt a sinking feeling in the pit of his stomach.

Sarfraz Ahmed and Mohammad Nawaz would be just as disgruntled. They had put on a partnership of 63 off only 45 balls. But moments after a long and animated chat in the middle of the pitch, the pinch hitter top-edged to third man and the captain top-edged to the wicketkeeper. They had been in harmony all night; Sarfraz even protected Nawaz after his first over leaked nine runs and bringing him back when the field restrictions were lifted, helping the left-arm spinner finish with an economy rate of 5.2. So perhaps it wasn’t all that surprising that they were dismissed in the space of two balls, giving 19-year old Sameen Gul and the Peshawar team the momentum they needed to seal the game

Quetta would have hoped to make their third final in a row, but those hopes have been dashed. Peshawar will have to deal with the pressure of another knockout match in Lahore, against Karachi Kings, on Wednesday.