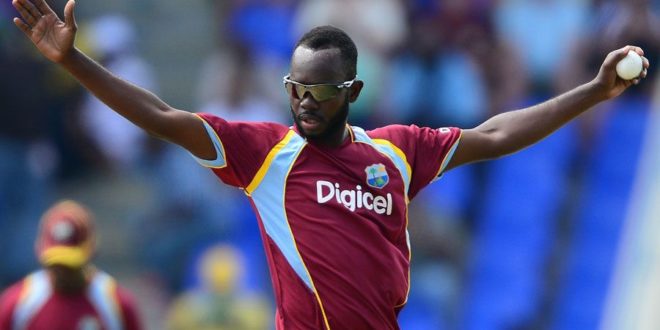 ST JOHN’S, Antigua (CMC) – Keemo Paul celebrated his call-up to senior team duty with a rapid half-century as West Indies “A” set the stage for another whitewash of England Lions, with a 25-run victory in the second one-dayer here Friday night.

The 20-year-old Paul lashed a 40-ball 55 to top-score as Windies “A”, opting to bat first at Coolidge Cricket Ground, recovered from 78 for five in the 21st over to reach 256 for nine off their allotted 50.

Test batsman Jermaine Blackwood followed up his 99 in the opening match on Tuesday with 53, while all-rounder Raymon Reifer stroked an unbeaten 45 and wicketkeeper Jahmar Hamilton, 35.

Left-arm spinner Jomel Warrican (3-41) and seamer Paul (3-55) then grabbed three wickets apiece as Lions were dismissed for 231 in the penultimate over of the innings.

They looked to be on course for victory at 173 for four in the 40th over, but lost their last six wickets for 58 runs, with off-spinner Roston Chase chipping in with two for 41.

West Indies “A” are now just one match away from completing yet another clean sweep after winning the first one-dayer, and all three of the four-day “Tests”.

hey appeared in early trouble, however, when new-ball bowlers Curran (3-31) and Richard Gleeson (3-52) made early inroads.

Captain Kieran Powell was taken behind in the sixth over for 10 after being squared by one from Curran and Devon Thomas — in the squad for the injured Chandrapaul Hemraj — followed in the next over from Gleeson for eight, scooping a catch to extra cover.

Chase perished for eight in the ninth over feathering an ambitious drive at Gleeson to be caught at the wicket, and Andre McCarthy (18) posted 29 for the fourth with Blackwood before needlessly lofting 21-year-old leg-spinner Matt Parkinson to Curran at wide mid-on in the 18th over.

When Rahkeem Cornwall was lbw to 20-year-old off-spinner Dominic Bess for eight in the 21st over, Windies “A” were losing their way fast.

However, Blackwood engineered the first revival, adding 69 for the sixth wicket with Hamilton before Paul and Reifer followed up with an invaluable 97-run, eighth-wicket partnership.

Blackwood faced 82 balls and struck six fours, while Hamilton counted four fours in a 34-ball knock before going stumped off Parkinson in the 34th over.

With five runs added, Blackwood holed out on the long on boundary off Curran, but Paul arrived to stroke four fours and four sixes, while Reifer lashed two fours and a six in a brisk 50-ball innings, to see West Indies “A” up to a competitive total.

In reply, Lions lost Nick Gubbins cheaply for nine with the score on 10 in the third over when the left-hander drove left-armer Reifer extravagantly to Thomas at cover.

Sam Hain, coming off a hundred in the first match, made a busy 21 before nicking an outswinger to wicketkeeper Hamilton as Lions slipped to 47 for two in the 10th over.

Davies and Northeast added 52 for the third wicket, but both fell within 16 runs of each other, leaving the visitors to rebuild yet again.

They did so in a 58-run, fifth-wicket stand between Jennings and Curran, leaving an equation of 84 runs from the last 63 balls.

But Chase had the left-handed Jennings caught and bowled in the 40th, and pacer Odean Smith bowled Curran in the following over as the run chase fell apart.

The final one-dayer is set for today at the same venue.