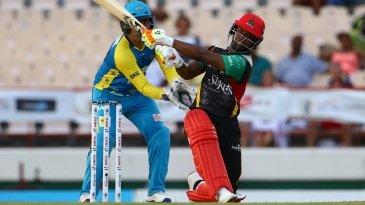 GROS ISLET, ST LUCIA - AUGUST 12: In this handout image provided by CPL T20, Evin Lewis of the St Kitts and Nevis Patriots plays a slogsweep during his innings of 92 as Kamran Akmal of the St Lucia Stars looks on during Match 10 of the 2017 Hero Caribbean Premier League between St Lucia Stars v St Kitts and Nevis Patriots at the Darren Sammy Stadium on August 12, 2017 in Gros Islet, Saint Lucia. (Photo by Ashley Allen - CPL T20 via Getty Images)

Evin Lewis struck the highest score of CPL 2017, bashing 92 off 52 balls as St Kitts & Nevis Patriots maintained their record as the only unbeaten team in the competition. They thrashed St Lucia Stars by 33 runs and are looking strong contenders to make the playoffs for the first time in three years.

After scoring five runs last weekend on the spongy pitches of Florida, Lewis feasted on a batting beauty, and the Stars’ wayward bowling unit – 16 wides were part of 23 extras – hitting five fours and seven sixes. His wagon wheel was heavily weighted to the leg side, as he punished the bowlers for straying on his pads with authoritative flicks to fine leg.

He motored to 88 off 46 balls when rain stopped play after 15.2 overs, causing a half-hour delay. A century had seemed certain, but Lewis struggled to regain his touch after play resumed, scoring four off six balls. Eventually, Kyle Mayers’ plan of bowling full and wide paid off as the batsman sliced a catch to a wide slip placed in the 17th over.

Mohammad Nabi came to the crease at the fall of Lewis and sent five of nine balls faced to the boundary. Mayers’ first ball to him strayed on the legs and was pulled past fine leg for four and Nabi powered Mayers over cover for four and six through the wind in the final over to finish unbeaten on 24 off 9 balls. The flourish helped Patriots equal the 196 posted by Barbados Tridents two nights earlier on the same ground as both the highest CPL total at the venue and for the 2017 tournament.

Despite the Pakistan Cricket Board’s demand for all players at the CPL to return home immediately, Mohammad Hafeez, Hasan Ali and Kamran Akmal had at least one more night to leave a mark on CPL 2017. It started off poorly for Hafeez with a golden duck at the hands of Jerome Taylor on leg before decision that may have been missing leg stump, but by the end of the night he created more positive memories, nabbing 3 for 22 after entering in the fourth over to stifle the Stars chase.

Johnson Charles fell to Hafeez’ third delivery for 13, skying a slog that eventually came down into Devon Thomas’ at point after running out from behind the stumps for the take. Akmal’s brief but charmed stay finally ended after six balls, caught at mid-off in Hafeez’ next over by Brathwaite. He took his final wicket – a fortunate return catch off a full toss to Marlon Samuels – on the last ball before drinks to make it 85 for 3, snatching back momentum from the Stars that had been seized by Andre Fletcher and Samuels.

Stars’ top-order has been starved of meaningful contributions early in CPL 2017 but it looked like they were going to get a major one from Fletcher, who had reached 48 at a strike rate of 150 to give Stars hope. But after Hafeez’ spell ended, Nabi replaced him and struck at the end of his first over, spearing in a yorker length ball to beat Fletcher.

After left-arm wristspinner Tabraiz Shamsi beat Darren Sammy with a quicker ball in the 15th, Nabi made further inroads when Shane Watson lunged at a flighted delivery and skied a catch to long-on. Mayers was stumped off a charge down the pitch for Nabi’s third to put the Stars seven down. Nabi should have had another before his spell ended had Brathwaite held on to a relatively straightforward chance coming in from the boundary offered by Mitchell McClenaghan.

It hardly mattered though and by the time he grabbed the cap from the umpire for the last time on the evening, he had figures of 3 for 15 and Stars’ equation was 58 off two overs. Some lusty hitting from Rahkeem Cornwall in the final over narrowed the final margin.