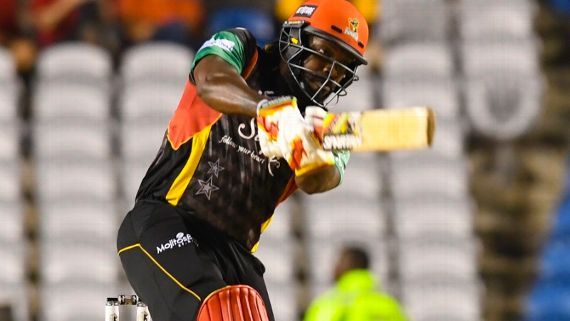 St Kitts and Nevis Patriots are one step away from completing a remarkable worst-to-first turnaround after defeating Trinbago Knight Riders by 38 runs on Tuesday night at the Brian Lara Stadium in Trinidad. Coming off the back of a last-place finish in 2016, and having never made the playoffs prior to this season, the win over Knight Riders put Patriots into Saturday night’s final.

As was the case on the opening weekend in Florida, Chris Gayle turned in a slow, but steady, half-century that proved especially valuable by the end of play. The captain’s fifty was backed up by three wickets from seamer Sheldon Cottrell as the Knight Riders batting order was left exposed by the absence of the injured Brendon McCullum.

One ball that shaped the course of the match

Ronsford Beaton opened the match with a superb maiden to Gayle, but it arguably should have been a wicket maiden. Bowling over the stumps to the left-hander, Beaton swung a yorker into Gayle’s left toe in front of middle stump. Perhaps surprised at his good fortune, Beaton gave a mild appeal and umpire Johan Cloete responded in kind with a mild shake of the head to give it not out. Replays confirmed the ball would have cannoned into middle and off stump.

Instead, Gayle went on to craft a patient 54 not out off 51 balls in a total of 149 for 7, earning himself a repeat trip to the final after leading the Tallawahs to the CPL title in 2016. The knock was reminiscent of his 66 not out off 55 balls against Guyana Amazon Warriors in a total of 132 for 3 earlier this season at Lauderhill. He dedicated the win to the people of Leeward Islands, who are bracing for Hurricane Irma.

Dan Christian was drafted in as a replacement for McCullum. Fresh off the plane from England, where he helped Nottinghamshire to the Natwest T20 Blast title, Christian gave Fabian Allen a stiff challenge for catch of the tournament.

Evin Lewis skied a drive over extra cover off Beaton in the third over, that appeared as if it would fall safely with no protection on the off side boundary. But Christian would not be denied. The ball hung in the air for six seconds, enough time for Christian to sprint 40 yards to his right from mid-off. He called off Colin Munro, who had also been running back from cover, and lunged to pull off a dramatic catch before giving Munro a piggyback ride into the circle for raucous celebrations as Knight Riders had struck a key blow early on.

Despite Christian’s heroics, Knight Riders paid the price for being unable to dislodge Gayle. Dwayne Bravo ended with four wickets on the night, but he also conceded at least one boundary ball in each of his four overs. In almost every instance, the sequence started with a boundary, before a wicket to bounce back. It began in the 14th with a six over square leg by Brandon King, followed next ball by a top-edge that was taken by Denesh Ramdin.

Carlos Brathwaite drove Bravo twice down the ground in the 16th and again to start the 18th, before Bravo nabbed him on the second ball of the 18th, splicing a catch to cover. Mohammad Nabi was beaten by a Bravo yorker to end the over to leave the score on 122 for 5 with 12 balls to go. But Patriots clipped 17 runs in a crucial final over, in which Gayle finally brought up his fifty with another straight four. Devon Thomas cracked a six over midwicket before he was caught at long-on off the last ball of the innings.

Not so super sub

William Perkins, who had yet to play this season, opened the batting with Sunil Narine but the results couldn’t have been worse.

Perkins was already twitching after three scratchy dots in the first over; and his nerves were even more evident when he set off for a run off the fourth ball from Cottrell. He connected well and Lewis only needed to take four strides to his left at cover, before gathering and firing a direct hit at the striker’s end. Narine had given up and was well short of his ground. Perkins’ forgettable night ended soon after, when he feathered a pull shot to Thomas down the leg side off Ben Hilfenhaus. Knight Riders were 2 for 2, seven balls into the chase.

Military man Cottrell accomplished his mission of tying down Knight Riders even further to help secure the victory. Munro’s attempted flick ended as a leading edge that floated tamely back to Cottrell, putting the hosts in a deep hole at 6 for 3. By the halfway point of the chase, the required rate had climbed to more than 10.

By the end of the 14th over, the Knight Riders were seven down when Dwayne Bravo attempted to resuscitate the chase, smashing Nabi’s first two balls of the 15th over deep midwicket for six. But Cottrell dismantled the final threat posed by the Knight Riders, claiming Javon Searles at long-off and Bravo at third man in the space of three balls.