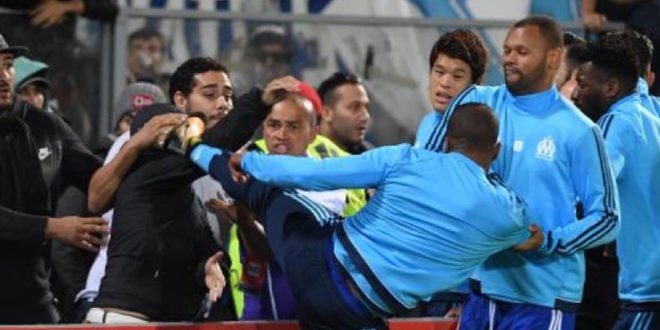 Patrice Evra has left Marseille by mutual consent and been banned from Uefa competition for the rest of the season for kicking one of his own fans.

The former Monaco, Manchester United and Juventus full-back, 36, is banned by Uefa until June 2018, the same month his Marseille deal would have ended.

Having played in the Europa League group stage, Evra would not have been able to play for another side in Europe this season even without his ban.

Evra aimed a kick at a fan next to the pitch before a Europa League game with Vitoria Guimaraes on 2 November.

The France defender joined Marseille in January 2017 from Juventus, where he had spent three seasons following his departure from Old Trafford.

“By mutual agreement, Marseille and Evra have decided to put an end to their partnership,” said a club statement. “The player’s contract is officially terminated with immediate effect.”

French newspaper L’Equipe reported that Marseille supporters had been jeering Evra for about half an hour while the players prepared for the game with Vitoria Guimaraes, which the Ligue 1 side lost 1-0.

The player had gone over to the fans to talk to them, but the situation escalated.

Evra, who was named as a substitute for the game, was dismissed before kick-off so Marseille were able to begin the match with 11 players.

During their Ligue 1 win over Caen on 5 November, some Marseille fans unfurled a banner that read: “You thought you were above the institution OM and its supporters. We don’t want you wearing our colours. Evra get out.”