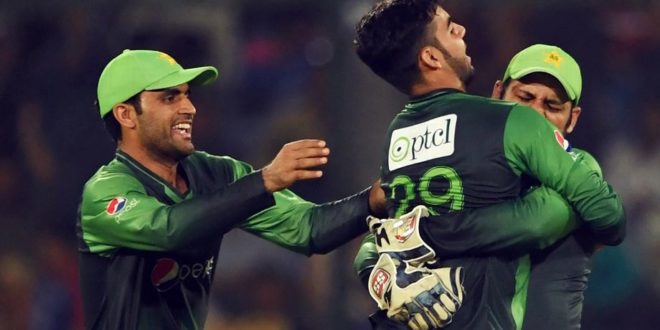 Pakistan won with 19 balls to spare to complete a 3-0 sweep. But given how ordinary West Indies have been on tour, this was a competitive match.

West Indies’ 153 could have proved handy on a different surface against another side, but in Karachi, it just didn’t seem enough against Pakistan’s firepower. Fakhar Zaman’s early onslaught – a brutal 17-ball 40 – brought the asking rate down drastically and from there on, West Indies had no answers.

Babar Azam continued his rich vein of form to stroke an unbeaten 51 to go along with his 97 not out on Monday, as Pakistan won in a canter.

West Indies lost Chadwick Walton for a duck but seemed to recover courtesy a 72-run stand between Marlon Samuels and Andre Fletcher. As solid as they were, what West Indies needed them was some big-hitting madness to the innings. Yet, it was a massive improvement to the shoddy batting of the previous two matches. Fletcher found his timing as the innings progressed as he top scored with 52, only for a mini-collapse to set West Indies back.

It began with Shadab Khan cleaning up Samuels with another gem of a googly, the variation so well concealed that Samuels didn’t seem to realise the stumps had been rattled. Fletcher was run out following a brilliant piece of fielding – and a direct hit – from Mohammad Nawaz. The debutant Andre McCarthy top edged Shadab to long-off, while extra pace from Faheem Ashraf trapped Rovman Powell in front. 74 for 1 suddenly became 97 for 5.

The last four overs proved profitable as Denesh Ramdin outwitted, outthought and outclassed Pakistan’s death bowlers. The absence of Mohammad Amir and Hasan Ali might have had something to do with that, but Usman Khan and Faheem are hardly poor substitutes. Ramdin, however, was all over them in a show of power hitting Lahore Qalandars fans will be wishing he had shown when he was with them just last month. He smashed three sixes and four fours as he surged to 42 off just 18 balls, and West Indies scored a respectable enough 153.

West Indies, however, failed to carry that momentum. Fakhar’s fireworks aside, Babar was his usual consistent self, almost effortlessly cruising to another 50 as he anchored Pakistan’s chase. Rayad Emrit, who was hammered to all parts of the under-renovation National Stadium in the first two games, was West Indies best bowler on the day, conceding just 24 in four overs. Unfortunately for the Jason Mohammed’s team, however, he didn’t take any wickets, and thus West Indies were never in with a shot of defending the target.

After Babar fell, new boys Hussain Talat – who has had a series to dream of – and Asif Ali took command of the chase. There was no pressure on them, really, but even so, the lack of drama with which they calmly steered the team home was impressive. In the end, it ended all too quickly as West Indies’ bowling disintegrated completely, and there’s plenty to be said about the limitations of the visitors. Today, however, the story was all about Pakistan – all about Karachi.