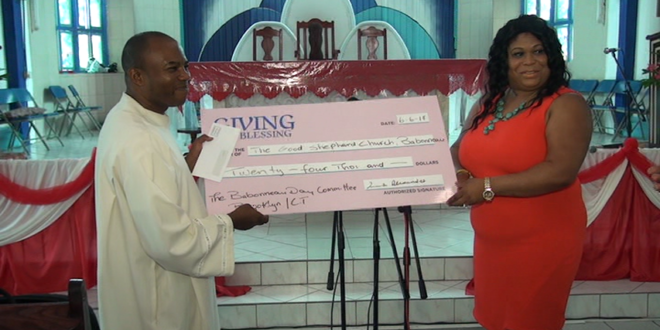 The Brooklyn and Connecticut Babonneau Day Committee presented a cheque to the Babonneau Good Shepherd Catholic Church. The contribution will assist with redesigning and refurbishing the church. The Church has commissioned; son of the late Dunstan St. Omer; Giovanni St. Omer to create a special one of a kind mural.

As part of the Babonneau Good Shepherd Church’s 70th anniversary of its construction; an overseas-based Committee has made a monetary contribution towards its renovation and restructuring.

The Babonneau Committee based in New York, held a Babonneau Day for Saint Lucians in Brooklyn to raise funds for the church.

President of the Committee Leander Alexander called on leaders to help keep the Babonneau community safe.

The Church has asked renowned artist; Giovani St. Omer to design a 3D mural for the new building. St. Omer says it will be the first of its kind in the region.

Babonneau Parish Priest Father Celestine extended thanks to the committee for thinking of the church.

The Babonneau Good Shepherd Catholic Church celebrates the 70th anniversary of its construction, on June 26th.