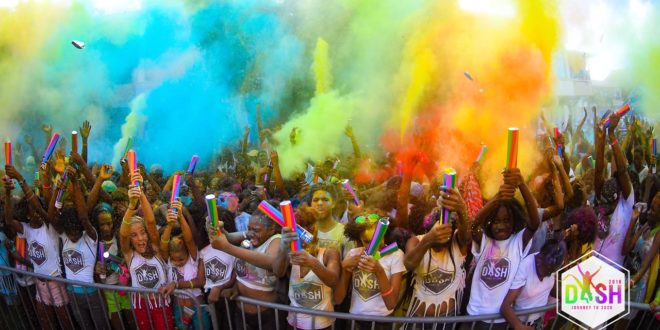 Press Release- In a parti-colored atmosphere of fun and family, the 4th edition of the DASH Colour Run delivered what is consider to be its most successful year yet – highlighting the true meaning of independence and unity.

Dubbed the most colourful event on the independence calendar, DASH 4 took place on Sunday February 25 and brought together over 2000 participants on a 5k stage set up with the sole purpose of bringing awareness to the patients of the Child Development and Guidance Center (CDGC) and the 2020 St. Lucian athletic hopefuls.

Heartwarming surprises of this year’s event began with the DASH executives embracing the true purpose of the undertaking through a moving and engaging period with its primary beneficiaries. It continued with overwhelming registration and celebrity endorsements – all underlining the spirit of a people and the recognition and support of the most vulnerable.

A surprise registration in this year’s event came from Mr. Dwight Moore – two-time Boston Marathon winner, lover of Saint Lucia and guest of Sandals Resorts who embraced the charity behind DASH and expressed support through participation.

Moore, who ended the run in second place without effort, was concluding a luxury vacation at Sandals Halcyon ahead of another major marathon. The West Virginia, USA resident said he was made aware of the event through a registration drive at the resorts, and was joined by over 50 Sandals employees at the event.

Organizers say 2018 has certainly set the stage for what promises to be an exciting Journey to 2020.

“We are overwhelmed with this year’s support. It has exceeded our own expectaitons and unlike previous years, our renewed vision will keep the DASH charity alive throughout the year to continue bringing awareness not only to the groups we support but to the overall spirit of humanity and sensitivity for our island’s children,” said Liive Productions Inc. Managing Partner Dione Benn.

DASH kicked off at 6:30am from Massy Mega and journeyed steadily along the Gros Islet highway before arriving at the ‘Independence Village’ in Rodney Bay. The route was littered with hydration and colour spots as the DASHers geared up for the burst of colour and unity that awaited.

Popular Saint Lucian entertainer DJ HP and his team lit the colourful path to the independence village where Saint Lucia’s finest in entertainment joined in charity to engage DASHers creating what was truly a family stage with a focus.

He was supported by the likes of Teddyson John, Michael Robertson, Young DP and DJ Scaddy who delivered stage performances in the village.

Robberta Rose, Partner at Liive Productions Inc. said the liveliness of this year’s youth participants was heartening to witness as it contrasts the abilities of the patients of the CDGC in physical expression but mirrored perfectly their energies in spirit.

Corporate and Academic Saint Lucia were tremendously represented at this year’s DASH, which was presented as its NEON Edition and came in tandem with a 2020 vision geared towards sports and the development of athletes poised to represent Saint Lucia at the 2020 Olympics in Tokyo Japan.

The CDGC and organizers of the event have expressed sincere gratitude to the sponsors and participants of the event.