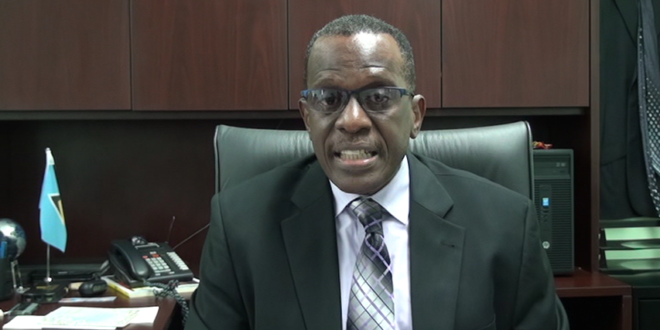 “Poor judgment”, according to the Leader of the Opposition Philip J. Pierre may have led to the August 21 dustup in the pressroom at the Office of the Prime Minister [OPM] between HTS News4orce reporter Miguel Fevrier and Minister in the OPM with responsibility for Tourism Mr. Dominic Fedee.

Mr. Fedee, a former senior level employee of regional hotel chain Sandals resorts and former local news reporter himself was pressed by the HTS reporter for answers on a purported Cabinet Conclusion to grant vehicle concessions to Sandals. Fevrier’s line of questioning was met with insults and stinging a retort from the Minister who refused to answer the “joke” question asked by the reporter.

The Opposition Leader on August 22 latched onto the ill-fated incident, offering Mr. Fedee and the Prime Minister some advice on Cabinet protocol. According to Philip J. Pierre, the Minster with responsibility for Tourism must recuse himself from any Cabinet deliberations pertaining to his former employer. The Opposition Leader went further, characterizing the move as a “poor judgment” on the part of the Prime Minister for allowing Mr. Fedee to sit in on Cabinet meetings regarding his former employer.

The Sandals luxury, vehicle concession allegations have made the rounds on the local talk show circuit – prompting reaction from the hotel, which sought to clarify the issue in a July press statement. The Minister with responsibility for Tourism demanded proof of the alleged Cabinet memo and vehemently declined to answer questions relating to the matter.

“…I will not answer to rumors and…gossip on the street…that can’t be a question, it’s not a credible question…,” the Minister said.