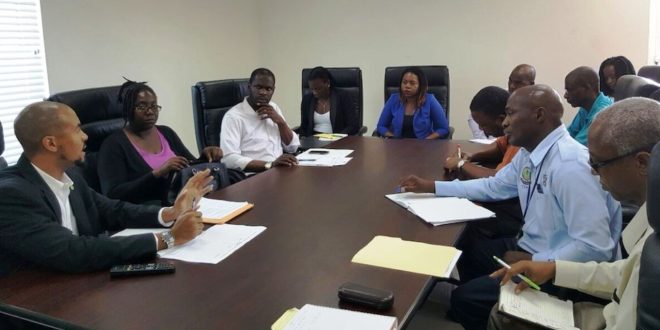 PRESS RELEASE – Operationalising the OECS Customs Union, which will result in the removal of barriers to free trade in the region, is being strengthened through a series of regional capacity building consultations being undertaken by the OECS Commission.

These sessions will provide a clearer understanding of the new era in domestic, regional and international trade for the seven OECS Protocol Member States, which would include the removal of import formalities on goods traded within the Customs Union and the harmonisation of border and regulatory procedures with respect to goods imported from countries outside of the region.

To date, the Commission has held consultations in St. Vincent & the Grenadines, Dominica, Montserrat and St. Kitts & Nevis on the work undertaken to establish the Customs Union and Free Circulation of Goods.  These are the next steps towards advancing the implementation process and augmenting the role of the OECS Commissioners and National Working Groups in facilitating the operations of these regimes at the national level.

During the consultations in Dominica and Saint Vincent and the Grenadines, officials from the OECS Trade Policy Unit, with support from the Hub and Spokes II Project, convened briefing sessions with the Member State’s respective Commissioner.

This was in addition to consultative sessions with the Ministry of Finance, Customs, and Inland Revenue Departments; Chambers of Commerce and other national private sector bodies; Agriculture, Standards, Health and Food Safety officials; as well as National Working Groups on Free Circulation of Goods and procedural requirements for operationalising the Customs Union.

Press Briefings were also held in Dominica and Montserrat to sensitise the public, and a special session of Cabinet Ministers was convened in Montserrat to foster greater input and participation from their respective Ministries.

Stakeholders also engaged in open and fruitful discussions on managing revenue on goods imported into the Customs Union and building capacity of national border and regulatory agencies to facilitate the free circulation of goods; including trade in fish and other marine products.

Additionally, stakeholders were updated on ongoing initiatives to enhance intra-OECS transportation logistics for trade in fresh produce and agro-processed goods, and proposals for building the capacity of farmers and manufacturers to better participate in the single OECS domestic space.

The OECS Commission will continue consultations in other Member States, before updating its strategic plan for the establishment of the Customs Union and free circulation of goods regime.

The Free Circulation of Goods in the OECS Economic Union is intended to enhance the development of the region’s economies by providing an environment where businesses can trade their goods, uninhibited, to a wider regional market and consumers have access to a broader range of quality products at more competitive prices. It is expected that this regime will lead to increased intra-OECS trade and investment, greater customer satisfaction, and improvements in the quality of life for OECS Citizens.