Home / News Updates / Opening session of the House of Assembly 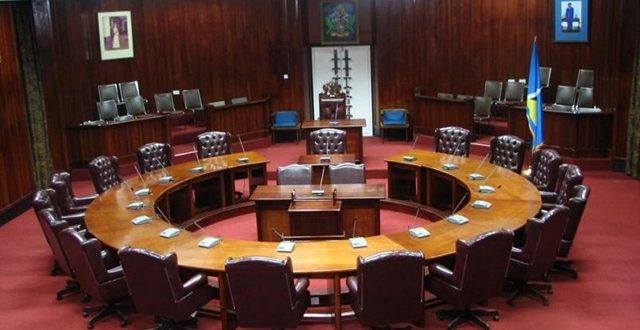 Opening session of the House of Assembly

[Press Release] The Third Session of the Eleventh Parliament is scheduled for Tuesday, March 20, 2018.

A Sitting of the House of Assembly is scheduled for Wednesday, March 21, 2018 at 2:00pm and Thursday, March 22, 2018 at 9:00 a.m. where the debate on the Estimates of Expenditure 2018/2019 will take place. A report of the Meeting of the Standing Finance Committee will also be presented.

The following Motion is down for consideration:

BE IT RESOLVED that the House of Assembly do adopt the Report of the Standing Finance Committee on the Estimates of Expenditure for the financial year 2018/2019 in the sum of ONE BILLION, FOUR HUNDRED AND EIGHTY-SEVEN MILLION, FIVE HUNDRED AND EIGHTY-THREE THOUSAND, TWO HUNDRED DOLLARS ($1,487,583,200) as a charge against the Consolidated Fund and other funds of the State of Saint Lucia.

Other Motions down for debate are:

1. BE IT RESOLVED that Parliament authorizes the Minister for Finance to raise on the Regional Government Securities Market or through private placement at a maximum rate of 7.25% –

2. BE IT RESOLVED the Parliament authorizes the Minister for Finance to borrow US$750,000.00 from the Caribbean Development Bank’s Special Fund Resources (SFR) to finance the Natural Disaster Management – Immediate Response – Tropical Storm Matthew Project;

BE IT FURTHER RESOLVED that –

(a) the interest is payable at a rate of two point five per cent per annum on the amount of the principal withdrawn and outstanding;

(b) the loan is repayable in thirty-two equal or approximately equal and consecutive quarterly instalments on each due date of the 1st day of January, 1st day of April, 1st day of July, 1st day of October commencing on the first due date immediately following the expiration of two years after the date of the loan agreement or on a later due date that the Caribbean Development Bank specifies in writing.

The following bills down for debate are: