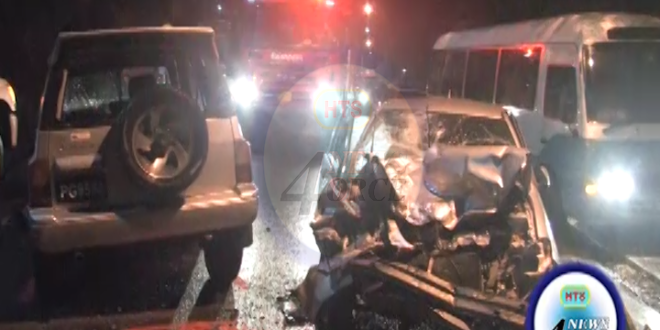 One person reportedly sustained serious injuries in an automobile crash on the Castries-Gros Islet Highway on Wednesday night.

The collision occurred around 9pm near Sandals Halcyon along the busy thoroughfare. Traffic was reduced to a snarl with a long line of vehicles stretching for miles, as emergency response vehicles struggled to get to the crash site.

Police and first responders had to divert traffic to the nearby hotel compound at Sandals Halcyon to pave the way for fire appliances and ambulances.

Details on the collision are still emerging. However, preliminary reports indicate that a south-bound SUV coming from Gros Islet, careened off the road and over the median-barrier, and then landed on another vehicle in the north-bound lane.

The driver of the north-bound vehicle was momentarily trapped inside the sedan and had to be extricated by first responders. The engine block of the Nissan Sentra registration PJ 4055 was completely destroyed, while damage to the other vehicle – a Suzuki model registration PG 9584 although extensive, was less severe.

The driver of the car was reportedly taken to Victoria Hospital for treatment. The man behind of the wheel of the Suzuki was interviewed by authorities at the scene. The victim’s condition as of news time was unknown. Traffic police are reportedly looking into the crash.