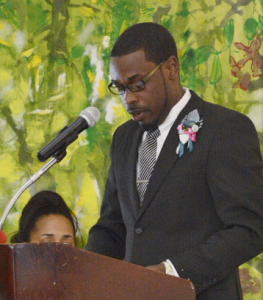 Thirty (30) year old Mr. Johann M. Harewood has been appointed by the NWU’s Central Committee to the position of Secretary General.

Mr. Johann M. Harewood is a graduate of the University of the West Indies (UWI) St. Augustine, Trinidad with a Bachelor’s Degree in Economics and Management.

He joined the National Workers Union in December 2011 and was assigned the responsibility of Finance Administrator in the NWU’s Finance Unit. In 2015 he was promoted to the position of Assistant Secretary General of the NWU with additional responsibilities for industrial relations.

Mr. Harewood has represented the NWU at a number of local, regional and international Conferences, Congresses and Industrial Forums. He is currently a member of the IndustriALL Caribbean Council and the UNI Global Union Americas Youth Executive.