Home / Sports / No fireworks from Russell, Narine as KKR slump 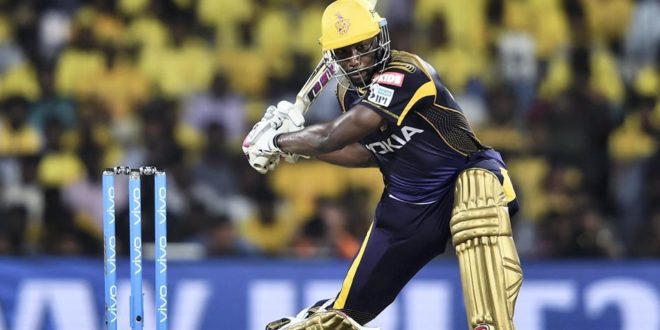 No fireworks from Russell, Narine as KKR slump

Asked to chase a challenging and imposing 211 for victory at Eden Gardens, KKR never recovered from a poor start and slumped to 111 all out in the penultimate over.

The big-hitting Russell, managed just two before he was the fourth wicket to fall, holing out in the deep in the eighth over with the score on 54.

Russell, who started the season strongly with an unbeaten 88 against Chennai Super Kings, has scores of two, nine and zero in his last three innings.

His West Indies teammate, Sunil Narine, fared little better at the top of the order, falling to the second delivery of the run chase, top-edging a pull at left-arm seamer Mitchell McClenaghan to be caught at mid-on for four.

Australian Chris Lynn and Nitish Rana, with 21, were the only two batsmen to pass 20.

Earlier, Mumbai piled up 210 for six from their 20 overs after being sent in, with wicketkeeper Ishan Kishan top-scoring with 62 from 21 deliveries, and captain Rohit Sharma and opener Suryakumar Yadav both getting 36.

West Indies opener Evin Lewis fell cheaply for 18 after adding 46 for the first wicket with Yadav, but Rohit and Kishan put on 82 for the third wicket to reinvigorate the innings.

With the win, Mumbai joined KKR on 10 points, but are one place ahead of them in the standings in fourth courtesy of a superior net run rate.