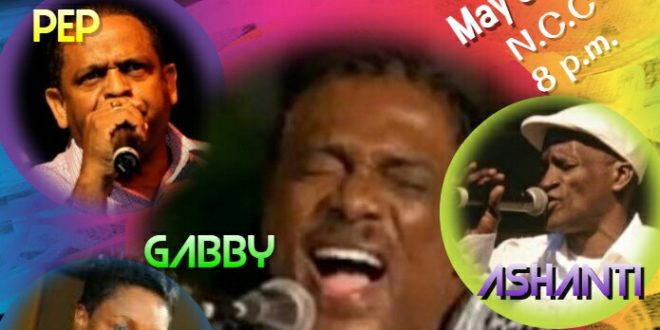 ‘Night of nostalgia’ for Legacy concert

[Press Release]  It is being billed as a night of nostalgia and an event that is expected to set the pace for the 2018 Calypso season after a phenomenal 2017.

“Legacy” will feature some of the most celebrated calypsonians in Saint Lucia’s rich calypso tradition. They include former monarch and the undisputed people’s king De Ashanti, with a repertoire of hits spanning several decades including “Sufferers Song (Malayway)”, “Jail,” “Juicy Lucy,” “Shanti Tell Dem So,” “Growing Population” and many more.

The stage of the National Cultural Center will also be graced by a number of other monarchs including the reigning sovereign Pep, TC Brown, Herb Black, Educator and Alpha among many others.

And, as a special treat, organizers will be presenting back on stage for the first time after many years out of the arena, Lady Spice who is Saint Lucia’s first female Calypso Monarch. The fiery Lady Spice made a huge splash on the calypso scene in 2000 with her performances of “This Woman Vex” and “Looking for a Man.”

To top off this special Calypso treat, Legacy will feature a Caribbean Calypso icon, with roots in Saint Lucia – the Mighty Gabby out of Barbados.

Gabby, who won his first Calypso crown in Barbados in 1968, with the song “Heart Transplant” has gone on to win several titles. He scored his first Road march in 1979 with “Burn Mr. Harding”, and has created memorable hits such as “Cadavers”, “West Indian Politician,” “Dr. Cassandra,” and “Jack” which takes on the tourism industry for giving preferential treatment to foreign visitors’ use of the beach and “Boots”, which took on the government’s prioritizing spending money on an army.

Legacy will unfold majestically Saturday May 5, from 8 pm at the National Cultural Centre with pre-show Steelpan entertainment.

The event is EC$30 advance and tickets are limited. This event is sponsored by PCD with Johnnie Walker Black and Campari, St. Lucia Distillers with Chairman’s Reserve and JP Chenet, Piton Beer and is powered by Yello.