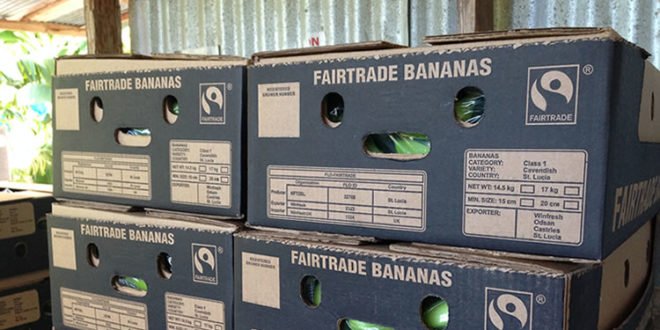 [PRESS RELEASE] The National Fairtrade Organization (St Lucia Inc.) is concerned about the growing debate and general misinformation circulating in the country regarding the use of IFCO (Plastic) Trays for the packaging of bananas to the United Kingdom Market.

In this regard the NFTO wishes to clarify the realities related to this product which has been in use in the banana industry for many years. IFCO (Plastic) Trays were introduced to St Lucia since the mid 1990’s as an alternative to collapsible cardboard boxes for some of our special packs which are distributed by some supermarkets in the United Kingdom.

Bananas sold to the majority of Supermarkets, which are our main distributors in the UK are already being packed in IFCO trays while the only supermarket chain which had not converted from cardboard boxes has indicated to the industry that they will be converting to trays in the near future. This decision is based on the objective of UK Supermarkets to reduce the incidence of waste disposal in their effort to become more environmentally friendly and save the cost of disposing used cartons.

The use of trays has no negative impact on the NFTO or its farmers.  In fact, it is more is beneficial to our farmers because they are much cheaper, stronger, less labour intensive and less likely to damage or collapse in moist or wet conditions. IFCO trays are recycled and are much cheaper than disposable cartons which are more susceptible to damage. It must be noted also that bananas exported to other distributors in the UK, the Regional Trade and Locally will continue to be packed in Cardboard Boxes and at the moment the NFTO utilizes about 4 000 boxes weekly for the local and regional markets while other operators handle a similar quantity. As a result, the use of cardboard boxes for banana exports is expected to continue for the foreseeable future.

The NFTO would welcome the production of IFCO trays in St Lucia for use by the industry but are not in a position to deny our distributors the product in the packages which they demand to place our members at risk of losing their market. The Banana trade is market driven and the NFTO is obligated to meet the demands of the supermarkets which distribute our bananas.