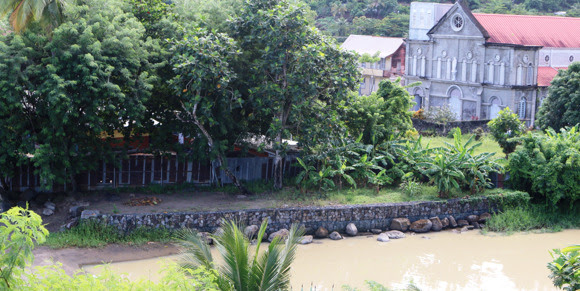 (PRESS RELEASE) – The Government of New Zealand has committed to continue flood mitigation works in the coastal community of Anse La Raye in Saint Lucia.

The initial construction of a river stabilisation wall has seen a marked decline in the flooding of properties along the Grande Rivière, especially the Anse La Raye infant school. The new project seeks to extend the protective wall along the beach, in an effort to prevent further soil erosion.

“The original wall has done a great job keeping the river from overflowing into the school compound, however the sand on the beach was not protected. Sea swells would push water towards the shore and this eroded and displaced the sand into the mouth of the river – causing debris to settle.”

“With this extension along the beach, the wall will protect the sand and allow the water from the Grande Rivière to flow freely out to sea,” explained Prescott.

The New Zealand Government, in collaboration with the OECS Commission, has assisted several OECS communities affected by the ‘2013 Christmas Eve Trough’ with disaster risk reduction interventions.

The partnership, entered into in September 2014, sought to increase the resilience of at-risk communities in Saint Lucia, Saint Vincent and the Grenadines and the Commonwealth of Dominica through the establishment of disaster preparedness facilities, rehabilitation of community infrastructure and provision of training.

The OECS Commission, as recipient of a Grant Funding Arrangement (GFA) with the New Zealand Ministry of Foreign Affairs and Trade (MFAT) in the amount of US$140,000.00, was responsible for identifying and monitoring the project interventions through its Social & Sustainable Development Division.

Work on the extension of the flood protection wall began on February 5, 2018.