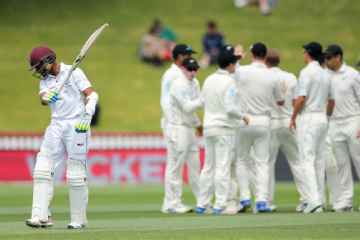 The defiance that West Indies had found on day three wilted, their wickets fell in a heap for the second time in the Test, and New Zealand sped to an innings-and-67-run victory – the hosts’ quicks having wiped the opposition out with the second new ball. Following the top-order partnerships West Indies had mounted on Sunday, it was the rate of their demise on Monday that was dispiriting. They added only 105 to the overnight score, and lost their last seven wickets for 62 runs, in the space of 20 overs.

The New Zealand quicks shared the wickets around, as the opposition perished to a series of poor strokes. Matt Henry added the wicket of Roston Chase to the two dismissals he had effected on day three, to finish with figures of 3 for 57. Trent Boult, Neil Wagner and Colin de Grandhomme claimed two wickets apiece meanwhile – Wagner’s wickets particularly significant, after he had been clobbered by the top order on Sunday.

This result means that New Zealand go to the second Test without having been stretched at Wellington. Although there were difficult moments in the field, particularly while Shimron Hetmyer and Kraigg Brathwaite batted together on the third evening, no bowler was required to deliver more than 45 overs in the Test, and at no point did West Indies muster a century stand.

It was the wicket of innings top-scorer Brathwaite – the only dismissal that went to a spinner in this innings – that set West Indies’ slide into motion. Having begun the day on 79, Brathwaite had progressed without incident into the 90s, as New Zealand rested their frontline quicks so they might be deployed only after the second new ball became available. Even before the 80th over rolled around, however, Brathwaite lost his wicket. Having nudged a legside Mitchell Santner delivery to the fine leg boundary, he misjudged the pace of the very next Santner delivery, and it brushed his back pad before it hit his bat. The ensuing lbw appeal was turned down on the field, but the batsman was given out upon review. Only 17 runs had been added to the overnight score at that stage.

Then, from the 86th over, came the rapid collapse. Shai Hope, whose innings had been defined by its reticence, was dismissed playing a defensive shot – a Boult lifter finding his outside edge, then Kane Williamson’s hands in the gully. Roston Chase, who had hit Boult for consecutive boundaries to get his innings under way, did not last long following Hope’s exit, inside-edging a wide Henry ball on to his stumps.

West Indies went to lunch with five wickets remaining, but New Zealand needed less than an hour after resumption to close the game out. Debutant Sunil Ambris edged de Grandhomme to wide slip, first ball after the break. Then, next over, Shane Dowrich slashed Wagner to point – it was the first ball Dowrich had faced in the session. The tail was in no mood to resist. Kemar Roach, Jason Holder and Miguel Cummins were all out in the space of 28 balls.

What was particularly disappointing for the West Indies was that the pitch had long since begun to favour batsman, and though the second new ball offered the New Zealand seamers bounce and carry, there was no dramatic movement. The only positive for the visitors, apart from some decent top-order scores, is that they now have an extra day of preparation for the Hamilton Test, which begins on Saturday.