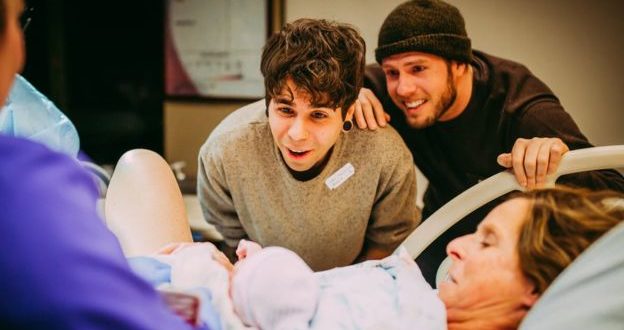 [BBC NEWS (US & Canada)- April 2nd, 2019]:- A 61-year-old Nebraskan woman has told of her joy after giving birth to her own grandchild, acting as the surrogate for her son and his husband. 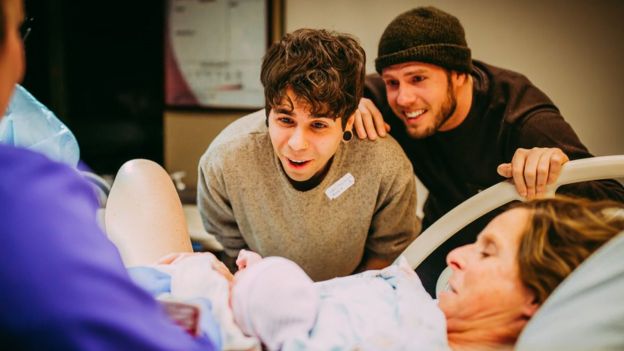 Cecile Eledge carried the daughter of her son Matthew Eledge and his husband Elliot Dougherty to term, giving birth to baby Uma Louise last week. Mrs Eledge said she made the offer when her son and Mr Dougherty first said they wanted to start a family. “Of course, they all laughed,” Mrs Eledge told the BBC. Mrs Eledge, who was 59 at the time, said her suggestion remained a sort of joke among family at first, not a realistic path forward.

“It just seemed like a really beautiful sentiment on her part,” Mr Dougherty said. “She’s such a selfless woman.” But when Mr Eledge and Mr Dougherty, who live in Omaha close to Mrs Eledge and her husband, began exploring options to have a baby they were told by a fertility doctor that it could be a viable option. Mrs Eledge was brought in for an interview and a series of tests, all of which gave a green light to the surrogacy. “I’m very health conscious,” she said. “There was no reason whatsoever to doubt that I could carry the baby.”

With Mr Eledge providing the sperm, Mr Dougherty’s sister Lea served as the egg donor. Mr Dougherty, who works as a hairdresser, said that while straight couples may consider IVF the last resort, for them it was their “only hope” for a biological child. “We always knew we had to be unique and think outside the box with this,” Mr Eledge, a public school teacher, added. 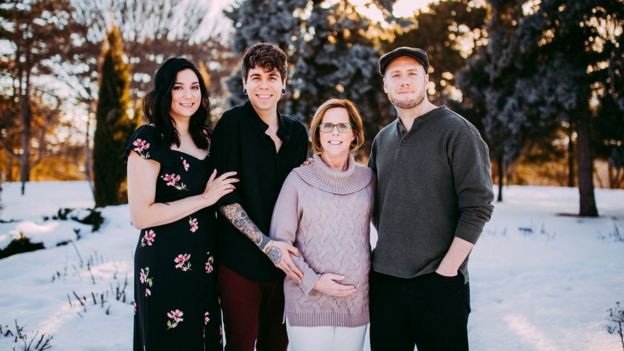 Mrs Eledge said the pregnancy was smooth throughout, the regular symptoms simply “elevated a little bit” compared to her previous pregnancies with her three children. In fact, the most obvious sign of her age came less than a week after Mrs Eledge was implanted with the embryo, when Mr Eledge and Mr Dougherty bought her a home pregnancy test to see if the transfer had been successful. “We were told not to, but the boys couldn’t wait,” Mrs Eledge said, laughing. She looked at the test and was devastated to see the results were negative. But when Mr Eledge came over later that day to comfort her, he saw something she hadn’t: a second pink line on the test, confirming a pregnancy.

“That was really a joyous moment,” Mrs Eledge said, accompanied by jokes about her failing eyesight. “She can’t see anything, but she’ll be able to deliver,” Mrs Eledge recalls Mr Eledge and Mr Dougherty saying. 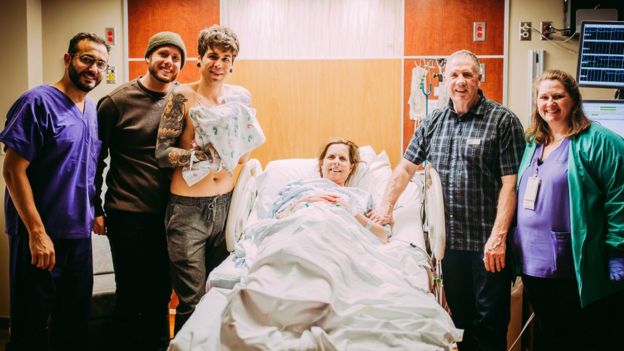 Mrs Eledge said the response to her pregnancy has been mostly positive, accompanied by a slight “shock factor,” particularly for her two other children, Mr Eledge’s siblings. “When everyone got the full picture it was nothing but support,” she said.

But the pregnancy exposed some persistent markers of discrimination against LGBT families in Nebraska. Though gay marriage has been legal in the state since the landmark Supreme Court decision in 2015, Nebraska has no state laws banning discrimination based on sexual orientation. Up until 2017, the state maintained a decades-old ban on gay and lesbian foster parents. Mrs Eledge said she fought, unsuccessfully, with her insurance company over health expenses that would have been covered if she was giving birth to her own child. And due to a law designating the person who delivers the baby as mother, Uma’s birth certificate lists Mrs Eledge alongside her son, and excludes Mr Dougherty. “This is just one small, micro example of the things that create road blocks for us,” Mr Eledge said. 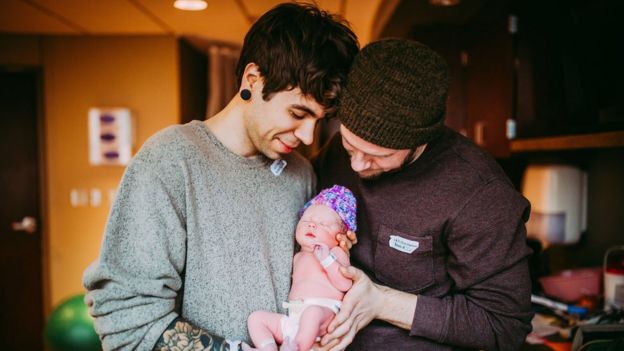 Typically a private family, Mrs Eledge says they chose to share their story to counter these examples of “hate” towards LGBT individuals and families, and convey “that there’s always hope out there”. “I’m learning not to take it personally,” said Mr Eledge of the negative responses to him and his family. “At the end of the day, we have a family, we have friends, we have a huge community that supports us.”

One week after Uma’s birth, Mrs Eledge says that she and her granddaughter are doing well. “This little girl is surrounded by so much support, she’s going to grow up in a loving family,” Mrs Eledge said. “This was how it was meant to be.”