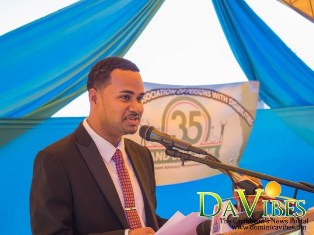 [Press release] President of The National Council for Persons with Disabilities, Merphilus James, was the guest speaker at the 34th Annual General Meeting of The Dominica Association Of Persons With Disabilities (DAPD) which was held in Roseau, Dominica on May 30th.

James urged the enthusiastic audience to be not simply members of disability organisations but to “feel, think and act as Disability Rights Advocates” and to “cherish and utilize the power of democracy and diplomacy in advocating for our advancement.”

According to Mrs. Irma Raymond Joseph, President of DAPD, the audience which included President of the Commonwealth of Dominica, His Excellency Charles Savarin, Minister for Health and Social Services, Honourable Kenneth Darroux and Minister of Ecclesiastical Affairs, Family and Gender Relations, Honourable Catherine Daniel, were extremely inspired by Merphilus James’ address and hailed it the highlight of the proceedings.

Well received were James’ statements that “Political parties know how to mobilize and to get persons with disabilities out to the polling stations on election day because every vote matters. They will promise to address our need for employment, housing, access to public services and to social assistance. All too common across the world however, is the total disappearance of this attention and zeal when they do get elected.”

The NCPD will continue to lobby and work with the Government of Saint Lucia for the ratification of the United Nations Convention on The Rights of Persons with Disabilities (UNCRPD)so as to ensure full protection and inclusion of persons with disabilities in all facets of society in our island nation.