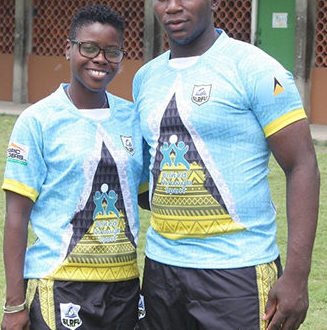 PRESS RELEASE:-On 24 September 2017, the President of the Saint Lucia Rugby Football Union (SLRFU), Mr. Roger Butcher, unveiled the new full rugby kits during a general meeting with its membership held at Castries Comprehensive Secondary School. The kits were sponsored by United Through Sport Caribbean and Tropic Builders Limited. These uniforms will be donned by national teams representing the country in local, regional and international competitions. SLRFU is deeply appreciative of the sponsors’ assistance.

The general meeting also discussed the recent developments in the sport for the region as deliberated at the Annual General Meeting of Rugby Americas North attended by Mr. Butcher on 18-19 August 2017 in Miami, Florida. He assured the SLRFU membership that the Union will continue to align its developmental activities to the objectives of the regional body. One of these activities is pursuing to push the introduction of rugby into schools. He also announced that the Union intends to send male and female teams to represent St. Lucia at the Barbados World 7s Tournament slated for the first week of December 2017.