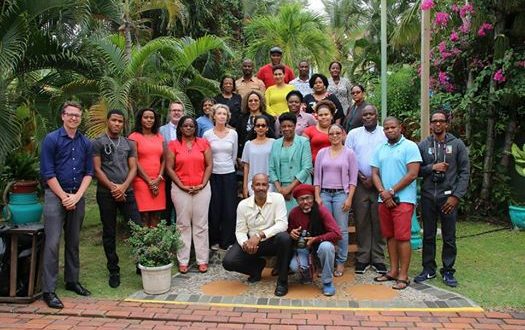 The aim was to foster enhanced awareness and hype up the conversation about taking action on climate change issues on the island. Participants also received an improved understanding of the stresses to the country’s economy, jobs and infrastructure; insight into how the Government of Saint Lucia is planning for those impacts through its National Adaptation Plan and otherwise; updates on the status of international climate change negotiations; and tools, tips and advice on covering climate change from other journalists.

Climate Change Experts within the Department of Sustainable Development, Mrs Dawn Pierre-Nathoniel says the media engagement was organised in recognition of the important role of media personnel and their ability to help influence thinking, mould outcomes, change behaviour and instigate action across the populace, at all levels.

A major highlight of the day`s session was a “Camera On You” segment, where members of the media were allotted five minutes to present a story on climate change adaptation for the opportunity to win a NAP Global Network Peer Exchange Award to attend an upcoming climate change media training workshop in Georgetown, Guyana, in July 2017. Miss Janelle Norville of Choice TV was selected winner by a four-member judging panel.

The Department of Sustainable Development will continue to work closely with the local media to increase climate change literacy and action across the island.